BREAKING: GOP congressman, others shot during baseball practice outside D.C. 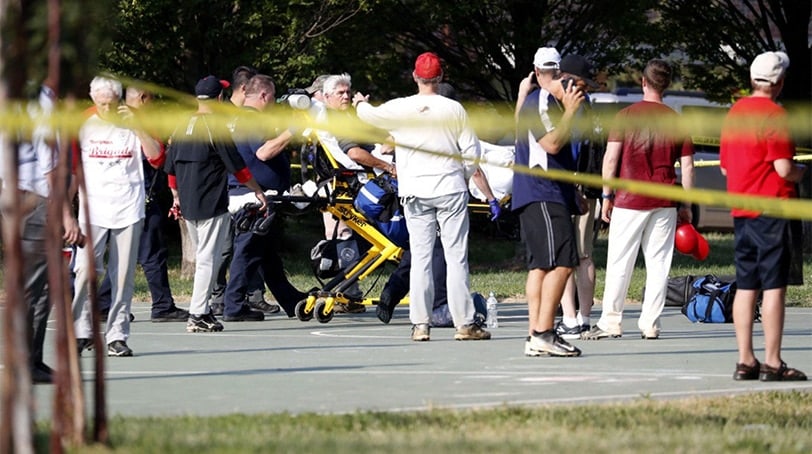 The scene of a shooting at a GOP baseball practice near Washington D.C. on Wednesday, June 14, 2017. (Photo: Shawn Thew via CNN)

A Republican congressman and at least two others were struck Wednesday morning when a gunman opened fire at a baseball field 10 miles outside the nation’s capital city.

House Majority Whip Steve Scalise suffered a gunshot wound to the hip after witnesses told Fox News a man armed with a rifle and a pistol fired 50-100 rounds at more than two dozen people gathered at Simpson Field in Alexandria, Virginia for one last practice before Thursday’s Congressional Baseball Game.

The event, a congressional tradition dating back to 1909, pits Republicans and Democrats against each other for charity. Arizona Republican Sen. Jeff Flake told local media he’s practiced with fellow congressional Republicans at the field in Alexandria for 16 years and anticipated tomorrow’s game would raise $650,000 for underprivileged youth in Washington, D.C.

Texas Republican Rep. Roger Williams was also photographed leaving the scene on a stretcher after injuring himself while jumping into a dugout for cover from the gunfire.

Brown said law enforcement arrived on the scene within three minutes, exchanging fire with the suspect — identified by law enforcement as James T. Hodgkinson, 66, of Belleville, Illinois — before shooting him and taking him into custody.

The shooter later died at the hospital, the president confirmed during a press conference just before noon Wednesday.

Alabama Republican Rep. Mo Brooks told WKRG News 5 he first saw the gunman behind third base, just moments before he shot Scalise. The suspect then took cover in a dugout until police apprehended him about 10 minutes into the attack.

“Behind third base, I see a rifle…I hear Steve Scalise over near 2nd base scream,” Brooks said. “While all of this is going on, Steve Scalise our whip was lying on the ground near the second base position crawling into right field, leaving a trail of blood.”

“The vice president and I are aware of the shooting incident in Virginia and are monitoring developments closely,” Trump said in an official statement. “We are deeply saddened by this tragedy. Our thoughts and prayers are with the members of Congress, their staffs, Capitol Police, first responders and all others affected.”

Leadership from sister organizations Everytown for Gun Safety and Moms Demand Action for Gun Sense in America released statements Wednesday morning in response to the shooting.

“Far too many Americans know what it’s like to be shot or have a loved one killed by gun violence,” said John Feinblatt, president of Everytown. “We’re grateful to Capitol Police for their quick response and our thoughts are with everyone affected by this tragic event.”

“Americans should be able to play baseball, dance in a nightclub, and attend religious services without the threat of gun violence,” said Shannon Watts, founder of Moms Demand Action. “We all deserve better.”

The National Shooting Sports Foundation posted a statement to their website saying, “Our thoughts and prayers are with the families of all the victims who were shot this morning including Congressman Steve Scalise of Louisiana. We salute the first responders, including the Capitol Police, who quickly stepped in to end the vicious criminal attack.”

Article updated at 11:40 a.m. EST to confirm the shooter died at the hospital earlier this morning.

Article updated 11:20 a.m. EST with the name of the shooting suspect.