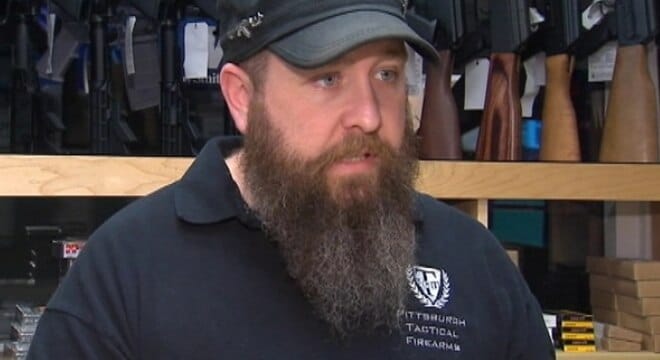 Erik Lowry plead guilty to selling guns through his shop, Pittsburgh Tactical Firearms, without the proper paperwork and illegal possession of a destructive device. (Photo: KRMG)

Erik David Lowry, owner of the now-closed Pittsburgh Tactical Firearms in McKeesport, plead guilty in federal court for felony witness and evidence tampering and owning a shotgun classified under the NFA as a destructive device without supporting documentation. He also plead to charges that his shop failed in its duty as a federally-licensed dealer to keep proper records on gun sales.

Indicted in March, court documents hold that from early 2014 until January 2017, the store sold and delivered over 100 firearms without completing any of the required federal paperwork for such sales. In a statement from the U.S. attorney’s office, these weapons were described by Lowry as “cash and carry,” “cash out the door,” or “turn and burn” firearms “off books” with officials cataloging 27 guns so classified on the store’s racks during one visit alone.

As for Lowry himself, he possessed for several months in 2016 a Penn Arms Striker 12-gauge destructive device that was not registered and, to keep the ATF from investigating the specialty weapon, asked several people at the shop to remove the gun from the safe and throw it in a dumpster to “avoid federal prison.”

Lowry’s sentencing is set for October before District Judge Arthur J. Schwab, where the former gun store owner faces as much as 55 years in prison as well as fines topping $1.25 million.

Court records show that Lowry is currently free on a $50,000 bond.