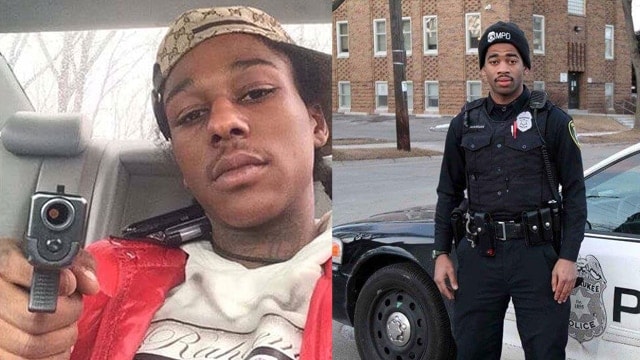 Opening statements kicked off Tuesday in the trial of a former Milwaukee police officer who shot and killed a man last summer, setting off two days of riots.

Prosecutors and defense attorneys say body camera footage will play a major role in the trial of 25-year-old Dominique Heaggan-Brown. That footage is expected to be made public during the trial, according to the Associated Press.

It all started during a traffic stop on Aug. 13. The 23-year-old Smith, a black man, ran away from Heaggan-Brown, who is also black, during the stop. Smith was holding a stolen handgun and tossed it over a fence while he looked back at Heaggan-Brown. That’s when the officer shot Smith in the arm. When he fell to the ground, Heaggan-Brown fired a second shot, hitting him in the chest and killing him.

“Sylville Smith is on the ground, his hands by his head, unarmed with nowhere to go,” Chisholm told the jury.

Heaggan-Brown fired both shots in less than two seconds. After the shooting, he said he fired the second round because he thought Smith was reaching for a gun in his waistband.

“These are literally split-second decisions that Mr. Heaggan-Brown is making,” said the former officer’s attorney, adding that Heaggan-Brown fired the second shot because he feared for his safety.

The jury, which includes three black men and two black women, will be sequestered for the trial, which is expected to take about a week.

Heaggan-Brown is charged with first-degree reckless homicide and could serve up to 60 years in prison if convicted. He’s been in jail since October for an unrelated sexual assault charge. He was fired by the department on Oct. 31.