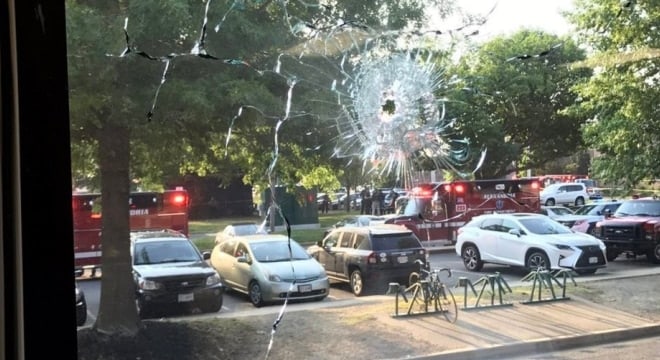 Five were shot Wednesday at a practice for Republican members of the Congressional Baseball Team in Alexandria, Virginia. (Photo: WJLA)

The shooting, at a practice for Republicans as part of an upcoming Congressional Baseball Game, left House Majority Whip Steve Scalise of Louisiana and four others injured. The shooter, who reportedly used an SKS semi-automatic rifle and a handgun, was killed after a shootout with police.

Po Murray, chairman of Newtown Action Alliance, responded to the incident with a call on lawmakers and President Trump to enact a ban on “military-style assault weapons,” fund “aggressive” federal research on gun violence, and repeal legal safeguards against frivolous lawsuits on gun makers.

“The majority of House and Senate Republicans were not courageous enough to reject the corporate gun lobby’s money and rhetoric and they have helped the gun industry sell more guns that are seeping into more public spaces throughout the nation,” said Murray on Wednesday.

“On days like today, there are no Democrats or Republicans, only Americans united in our thoughts for the wounded,” said House Democratic Leader Nancy Pelosi in a statement, before refraining from wading into contentious gun politics during a seven-minute speech on the chamber floor. Rhode Island’s David Cicilline, an author of past assault weapons ban proposals, and California’s Mike Thompson, current chair of the House Gun Violence Prevention Task Force, echoed Pelosi’s remarks.

Calling Democrats to task, Second Amendment Foundation founder Alan Gottlieb characterized the shooting in Alexandria, Virginia as a direct result of vitriolic rhetoric directed towards GOP leadership from across the aisle.

“This hate speech that has been going on since Donald Trump was elected,” said Gottlieb in an email to Guns.com. “It gets their voter base agitated and this is what happens as a result.”

Social media pages belonging to the fatally-wounded gunman suggested he was a Democrat, and supporter of Vermont’s U.S. Sen. Bernie Sanders, an Independent who caucuses with the left. Sanders, in a statement issued through his office, confirmed the man was a volunteer in his 2016 presidential campaign but condemned the man’s actions.

“Let me be as clear as I can be. Violence of any kind is unacceptable in our society and I condemn this action in the strongest possible terms,” Sanders said.