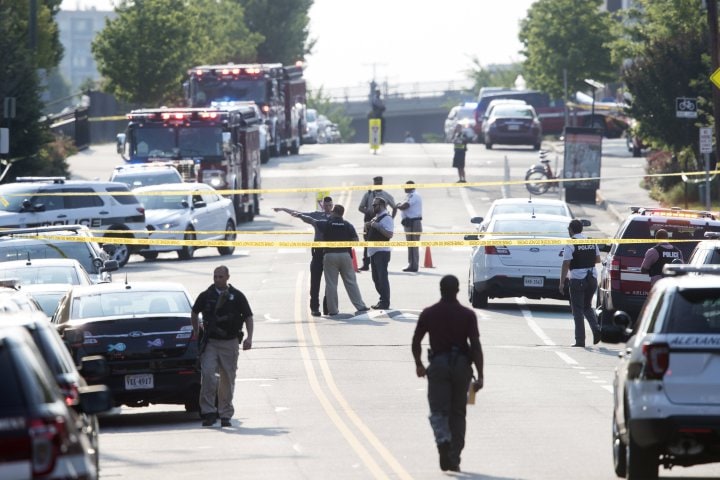 First responders on the scene following a shooting in Alexandria, Virginia, on June 14. The Republican House majority whip Steve Scalise and at least four others have been shot at a congressional baseball game practice session, according to media reports. (Photo: Michael Reynolds/European Press Photo Agency)

Lawmakers cancelled a hearing scheduled Wednesday to debate an extensive gun bill in the wake of the ball field shooting in Alexandria, Virginia earlier that same morning.

The Sportsmen’s Heritage and Recreational Enhancement Act included 18 provisions involving shooting sports and other outdoor recreational activities, some of which eased regulations on silencers and armor-piercing ammunition.

According to multiple reports, 66-year-old James T. Hodgkinson, of Belleville, Illinois, armed with a rifle and a handgun, began firing on more than two dozen congressional Republicans and staffers that were practicing at the field in preparation for a charity baseball game scheduled Thursday. A security detail accompanied Scalise to the field that morning — a factor many lawmakers at the scene insist saved their lives.

Alexandria law enforcement arrived at the scene three minutes into the attack. Police Chief Michael Brown said officers exchanged gunfire with Hodgkinson, ultimately shooting him and taking him into custody 10 minutes after the attack began.

He later died at the hospital.

Hodgkinson, a home inspector, moved to Alexandria two months ago, his wife told the Huffington Post Wednesday. He was a dedicated Bernie Sanders supporter who despised the Republican party and former Democratic presidential nominee Hillary Clinton and had a violent arrest record including charges for domestic battery, criminal damage of property and reckless discharge of a firearm.

“Let me be as clear as I can be. Violence of any kind is unacceptable in our society and I condemn this action in the strongest possible terms,” Sen. Bernie Sanders said on the Senate floor Wednesday. “Real change can only come about through nonviolent action, and anything else runs against our most deeply held American values.”

In a press conference just before noon, Trump rebuked the shooter’s actions and called for unity.

“We may have our differences, but we do well in times like these to remember that everyone who serves in our nation’s capital is here because, above all, they love our country,” he said. “We are strongest when we are unified.”

“The Department of Justice will provide all resources necessary for a thorough investigation,” he said. “I commend the heroic officers of the Capitol Police and the Alexandria Police Department. Their willingness to risk their lives to keep us safe is humbling and inspiring.”

The Congressional Baseball Game, a tradition dating back to 1909, pits Republicans and Democrats against each other for charity. Arizona Republican Sen. Jeff Flake told local media Wednesday he’s practiced with fellow congressional Republicans at the field in Alexandria for 16 years and anticipated tomorrow’s game would raise $650,000 for underprivileged youth in Washington, D.C.

The event will continue Thursday as scheduled.

Scalise, who suffered a gunshot wound to the hip during the attack, underwent surgery Wednesday afternoon and remains in critical condition, according to the New York Daily News.