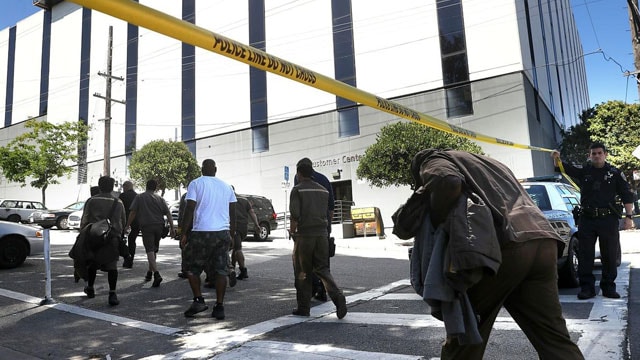 A shooting at a San Francisco UPS facility Wednesday morning left four people dead, including the gunman, who killed himself in front of responding officers.

Assistant Police Chief Toney Chaplin confirmed in a press conference that a total of six people were shot, but two survived and remain hospitalized. Five others sustained various injuries, which likely occurred as they rushed to safety when gunfire erupted.

The deceased victims were identified as Wayne Chan, 56; Michael Lefiti, 46; and Benson Louie, 50. The gunman was identified as Jimmy Lam, 38.

According to a San Francisco Police Department press release, officers were called to the facility just before 9 a.m. on reports of an active shooter with several people injured. Responding officers split into contact teams and as they came across injured victims, rushed them to safety, and immediately administered medical aid.

While searching the facility, one team encountered Lam, who was still armed with what was described as an “assault pistol.” At that point, Lam put the gun to his head and took his own life. No shots were fired by responding officers.

Officers secured Lam’s weapon and continued to secure the building and search for any additional victims. Two weapons were reportedly recovered at the scene. One employee, described as a witness, not a suspect, was found hiding inside the facility during the search.

Chaplin called it a “frightful scene.”

Authorities said Lam acted alone and the incident was not believed to be an act of terrorism. According to reports from local media, Lam filed a grievance in March over excessive overtime hours, and co-workers said Lam “had it out” for his manager. It’s unclear if the manager was one of the victims.

“They are happy and hardworking people. We know them in every single neighborhood in the city,” San Francisco Mayor Ed Lee said of the UPS employees while assuring that the families of the deceased victims would be taken care of.

Lee called the shooting a “senseless act of violence” and thanked first responders for their efforts.