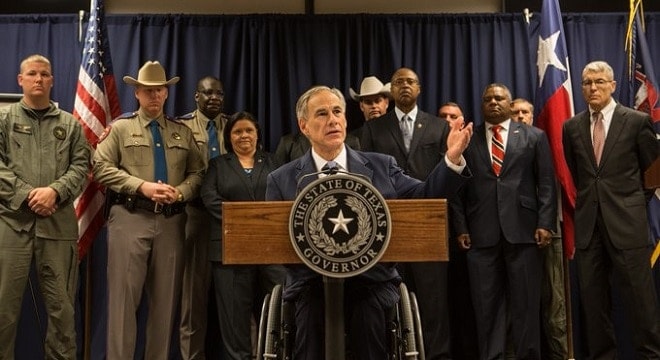 The measure, HB 2908, was proposed by Rep. Todd Hunter, R-Corpus Christi, and passed the legislature with only one lawmaker, Rep. Jarvis Johnson, a Houston-area Democrat, voting against the bill. Abbott first backed the proposal to expand hate crime protections to law enforcement last July in the days immediately after an attack on Dallas police officers that left five dead left five dead.

“The men and women in uniform risk their lives every day to protect the public, and it is time we show them the State of Texas has their back,” said Abbott at the time. “Texas will no longer tolerate disrespect for those who serve, and it must be made clear to anyone targeting our law enforcement officials that their actions will be met with severe justice.”

The new law adds police and judges to those threatened or targeted because of their perceived race, color, disability, religion, national origin or ancestry, age, gender, or sexual preference. As such, it would increase penalties for those who assault a law enforcement officer or jurist to as much as 20 years in prison. Attacks that result in severe injury could result to life in prison on conviction.

Civil rights advocates such as the Austin Justice Coalition and others argued the proposal was an insult to historically marginalized groups for which hate crime laws were established to protect, and is a step backward in relieving prison overcrowding.

“Although the work of peace officers is incredibly important, and many put their lives on the line every day, their inclusion into this statute meant to address bias and prejudice is inappropriate,” said the Texas Civil Rights Project in opposition to the measure.

A federal bill, the Thin Blue Line Act, which would impose the death penalty on those convicted of killing or attempting to kill first responders passed overwhelmingly in the U.S. House last month.