Retired Marine reunited with his M1 after 56 years 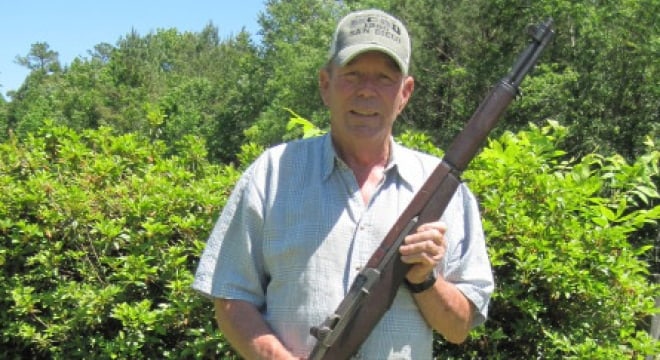 A North Carolina military retiree recently got to wrap his hands around a rifle he hasn’t seen for a long time and is now destined to be passed on his to grandson.

Pat Farmer shipped off to the Marine Corps Recruit Depot in San Diego at age 17 in 1960 where he was soon issued an M1 Garand which, as vouched for by the custody receipt he signed, was serial #4305638. He and the rifle parted ways the next year as he went on to aviation training and by that time M1s were being replaced in front-line use by the M14.

Nevertheless, he contacted the Civilian Marksmanship Program in 2013 as a lark after finding the old custody receipt to see if they had come across his gun in their surplus stacks transferred regularly from the Army.

It turns out, as reported by The First Shot, CMP’s magazine, they had Farmer’s gun in inventory. The non-profit federally chartered corporation does, in fact, handle requests for those looking for special guns, such as in Farmer’s case. They have 32 such requests on file, but it is rare they are able to fill them.

“I have been in the serial number/inventory department for approximately eight years, and there have only been about five rifles that have been reunited,” said the CMP’s Jennifer Smith. “If we do not find the rifle in our current inventory when we are contacted, we keep the serial numbers and periodically will search again in case it has been received in new shipments.”

Though Farmer’s once-issued M1 was accounted for, it was still officially on the Army’s books and was only officially transferred this April to the CMP. After grading and checking out the gun to make sure it was safe, Farmer received the gun last month.

“I was elated,” said the retired serviceman, now 74. “It felt familiar.”

As for his plans for the M1, a weapon that Gen. George S. Patton once described as “the greatest battle implement ever devised,” it isn’t likely to see a lot of hard use moving forward.

“I’m going to shoot a few rounds, clean it and put it in the safe,” said Farmer. “I’ll take it out occasionally, and try to do the manual of arms correctly. One of my grandsons will eventually get it.”