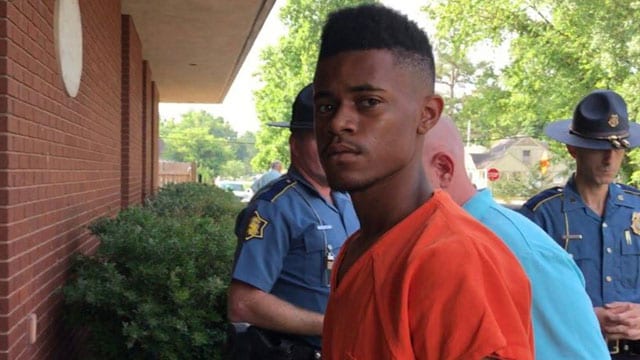 Tyler Calamese, 18, is charged with capital murder for the shooting death of a Newport police officer earlier this week. (Photo: KATV)

An Arkansas teen was charged with murder for the fatal shooting of a Newport police officer Monday night, but the teen’s family maintains he is innocent.

Initially, Tyler Calamese, 18, was held for questioning in the case but was formally charged with capital murder in a Jackson County court Wednesday.

According to a news release from the Arkansas State Police, Newport Police Lt. Patrick Weatherford was one of two officers who responded to a call about a vehicle break-in around 6 p.m. Upon arriving where the break-in allegedly occurred, Weatherford noticed an individual who immediately fled the area.

A foot pursuit followed and included Weatherford as well as several other Newport police officers. While fleeing through a residential area, the suspect, who was later determined to be Calamese, turned and fired at the officers in pursuit, striking Weatherford.

Weatherford was transported to the hospital where he later died.

It’s unclear at this point how the suspect eluded authorities after the shooting, but the gun used in the crime is believed to have been tossed into a lake in the Remmel Park area. It has yet to be recovered.

Furthermore, Calamese’s mother, Shanika Reynolds, told THV she was text messaging her son at the time of the shooting. She also said he was at an apartment complex several miles away from where the shooting occurred and he had been there all day.

However, according to Arkansas State Police investigator Wendall Jines, Calamese confessed to firing the shot that killed Weatherford. Still, the teen’s family feels he was “railroaded” into confessing. Reynolds said her son is scared and that the family has received numerous death threats since the shooting.

Calamese, who was assigned two public defenders, is being held without bail. He is due to appear in court June 20.