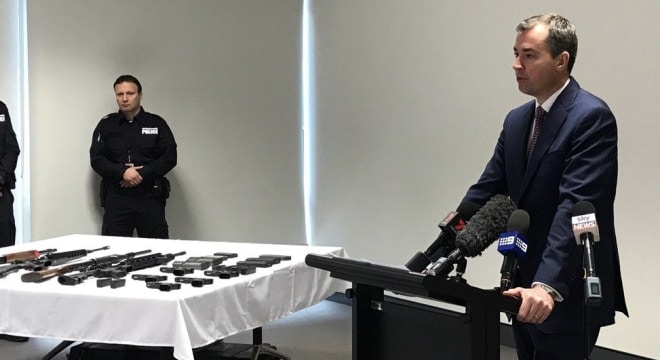 Australia’s Minister for Justice, Michael Keenan of the Liberal Party, is encouraging those with heirloom guns they are looking to get rid of to bring them in to police (Photo: Parliament of Australia)

Justice Minister Michael Keenan announced plans on Friday to allow those with illegal or unregistered guns to turn them in without compensation.

The three-month National Firearms Amnesty will begin on July 1 to remove unwanted firearms from the island continent with a population of around 24 million. While there have been several state and regional turn-in events, this will be the first nationwide period in over two decades.

Australia held a nationwide gun buyback in 1996 following a mass killing known as the Port Arthur massacre, where a gunman murdered 35 people and injured 24. The measure led to severe restrictions on firearms including an outright ban on most semi-automatic and pump-action rifles and shotguns. During the enactment of the law, the government bought back nearly 700,000 guns at a cost of $500 million.

The effect of the buyback is subject to debate. While conflicting studies have argued violent crime statistics have gone up while others hold they have dropped in the past 20 years, Melbourne – Australia’s second largest city – has seen 100 shootings since 2015. In the past decade, firearms offenses have more than doubled from 2,308 to 4,947.

According to a 2016 report by the Australian Criminal Intelligence Commission, there were 2.89 million legally registered firearms in the country in the hands of 816,000 license holders. Meanwhile, the illicit market is believed to contain somewhere between 300,000 and 600,000 unregistered guns, many trafficked by organized crime groups, including outlaw motorcycle gangs.

The availability of firearms to criminals has been a talking point in the country in recent weeks following a terror attack known as the Brighton Siege last month where a 29-year-old Somali-born Australian on parole killed a hostage before dying in a shootout with police. The shotgun used in the incident, for which terror group ISIS has claimed responsibility, was illegally obtained.

“Sadly, as recent events have shown us, just one gun in the wrong hands can be deadly. I encourage Australians to take this opportunity to help remove unregistered firearms from the community,” said Keenan.

Firearms turned in during the amnesty, which will end Sept. 30, will be slated for destruction at no cost to those surrendering them.