Escaped Georgia inmates captured thanks to the aid of armed citizens 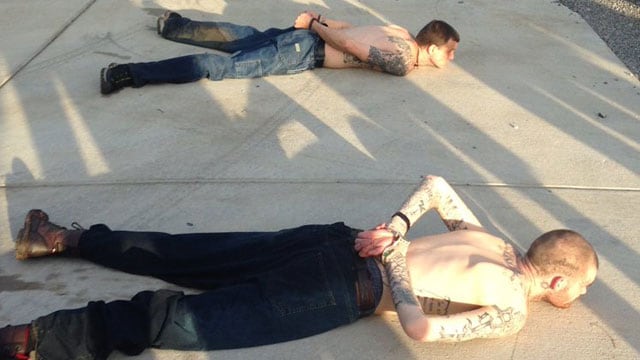 Two escaped Georgia inmates who have been on the run for more than two days after killing two corrections officers during a routine transport in Putnam County Monday morning were captured in Shelbyville, Tennessee, Thursday night.

The Georgia Bureau of Investigation confirmed the capture of Ricky Dubose and Donnie Russell Rowe just after 8 p.m.

Several hours before their capture, the two inmates broke into an elderly couple’s home, tied them up, and held them captive for three hours before eventually taking off with the couple’s cell phones and Jeep.

As the inmates were leaving the home, a Tennessee trooper was coming to the house to perform a welfare check, and a chase ensued. The chase continued for 10 miles, ending with the inmates crashing the stolen Jeep. Shots were fired during this time, but no one was injured.

Dubose and Rowe then fled into a wooded area and made their way to another nearby home. However, when the homeowner saw the inmates in his driveway, he held them at gunpoint and called his neighbor over for assistance. The two held the inmates at gunpoint until authorities arrived a short time later.

The inmates were apparently still in possession of the murdered corrections officers’ guns when they were captured, the Atlanta Journal-Constitution reported.

The deceased officers were identified as Sgt. Curtis Billue and Sgt. Christopher Monica. Billue will be buried Saturday and Monica on Tuesday. Both left families behind. A Go Fund Me has been set up for Monica’s family, which includes two grandchildren who lived with him.

Putnam County Sheriff Howard Sills said it’s a relief to have the inmates back in custody.

Likewise, Georgia Department of Corrections Commissioner Greg Dozier said in a press release, “We are relieved to know that these two dangerous individuals have been taken off the streets, and the public is out of harm’s way.”

In a statement, Georgia Governor Nathan Deal thanked law enforcement officers for their support and assistance.