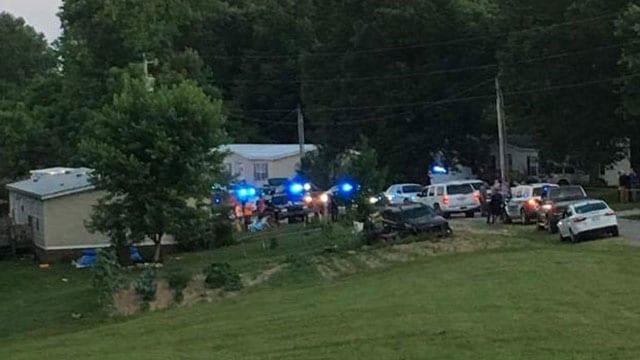 Police cars surround a home where a woman was brutally attacked by her ex-husband. (Photo: WNCN)

A domestic dispute in Centerville, Tennessee, Tuesday night left one man dead and the woman he was attacking hospitalized.

The incident unfolded around 7 p.m. when police say the man, later identified as William Taylor II, showed up at his ex-wife’s home and began attacking her with a weapon.

During the assault, the woman’s neighbors heard a commotion and came to see what was happening. Finding the woman injured, the neighbors attempted to help her, but at that point, Taylor turned his attention toward the neighbors and started attacking them as well.

However, one of the neighbors – a female – was armed with a handgun and shot Taylor, who then ran to the back yard and collapsed. He was pronounced dead at the scene.

Authorities did not say what type of weapon Taylor was carrying, but his ex-wife was med-flighted to a Nashville hospital with injuries that were described as severe.

The couple’s children were home at the time of the attack but were uninjured.