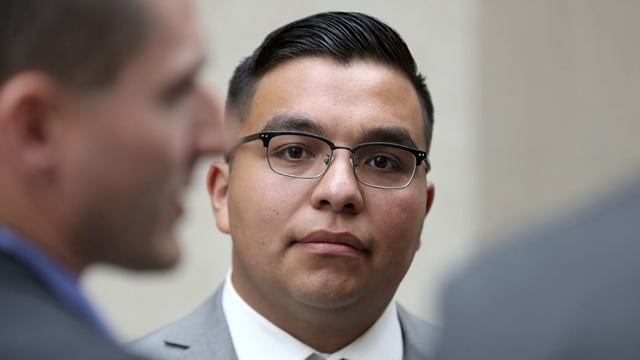 The police officer who shot and killed a man during a traffic stop in Minnesota last summer was acquitted of all charges Friday, sparking thousands of people to protest through the streets of St. Paul.

The jury spent just 27 hours over five days deliberating before handing down a not guilty verdict for 29-year-old St. Anthony police officer Jeronimo Yanez, according to the Star Tribune. He was facing one count of second-degree manslaughter and two counts of reckless discharge of a firearm.

Yanez, a Mexican-American, shot and killed 32-year-old Philando Castile, who was black, last July during a traffic stop in the St. Paul suburb of Falcon Heights. Castile told Yanez he was licensed to carry a firearm and then reached for his wallet. Yanez fired his weapon seven times at Castile. Five of those bullets hit him.

Castile’s girlfriend, Diamond Reynolds, streamed the aftermath of the shooting on Facebook Live. The video shows a frantic Yanez yelling and pointing his weapon at Castile, who sat slumped over and bloodied in the driver’s seat.

“He’s licensed to carry. He was trying to get out his ID and his wallet out of his pocket and he let the officer know he had a firearm and he was reaching for his wallet. And the officer shot him in his arm,” Reynolds says in the video.

Authorities later confirmed that Castile was licensed to carry.

Yanez didn’t react Friday as the verdict was read. His attorneys said they were “satisfied” with the outcome.

“We were confident in our client,” said attorney Tom Kelly. “We felt all along his conduct was justified. However that doesn’t take away from the tragedy of the event.”

One juror said the jury was split 10-2 earlier in the week for acquittal. He said the two holdouts were not the jury’s only two black jurors.

The city of St. Anthony announced after the verdict that Yanez would receive a “voluntary separation agreement” and would no longer serve as an officer there.

“I am so disappointed in the state of Minnesota,” said Castile’s mother, Valerie Castile, at a news conference after the verdict was read. “My son loved this city and this city killed my son. And the murderer gets away.”

Protests late Friday shut down portions of Interstate 94, but there were no reports of any violence.