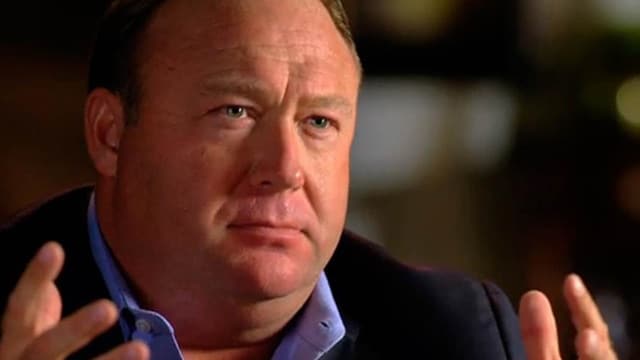 Alex Jones during his interview with Megyn Kelly, which aired on NBC on Sunday. (Photo: NBC News)

Conspiracy theorist Alex Jones provided no greater insight nor did he disavow his repeated claims that the Sandy Hook school shooting was a hoax during his interview Sunday night with Megyn Kelly.

“I tend to believe that children probably did die there. But then you look at all the other evidence on the other side. I can see how other people believe that nobody died there,” Jones told Kelly when she pressed him on his past statements.

The “evidence” he’s referring to are speculative interpretations of videos and rumors surrounding the incident. Many of those interpretations support the narrative that the shooting was created by the government to strip away gun rights from the American people.

Since the 2012 incident, Jones has has been wishy-washy on just what kind of hoax Sandy Hook was. In some instances he described it as an entire fabrication and in others he characterized it as a government plot. But he chalks it up to him reviewing every position and playing devil’s advocate.

Regarding one statement he said on his show in 2014 — “The whole thing is a giant hoax. The whole thing was fake.” — he said he was playing devil’s advocate, despite making a declarative statement.

“Yes. Because I remember, even that day, to go back from memory, then saying, ‘But then, some of it looks like it’s real.’ But then what do you do, when they’ve got the kids going in circles, in and out of the building with their hands up? I’ve watched the footage. And it looks like a drill,” he told Kelly.

The shooting, which left 20 first-graders and six educators dead on Dec. 14, 2012, in Newtown, Connecticut, spurred public debate over gun control that resulted in an exponential spike in gun sales and 109 new state gun laws — the majority of which loosened restrictions.

And Jones’ baseless claims about Sandy Hook have also had real-world consequences. Earlier this month, a Florida woman was sentenced to five months in prison for harassing the father of a child slain in the shooting. The woman said she informed her belief that Sandy Hook was fake by reports by Jones’ InfoWars and other similar publications.

Kelly’s report on Jones revealed his editorial process, or lack thereof, in which he would gather a collection of news reports from the Internet, read them on air and then opine in realtime. Printed articles published on his website are often aggregated and published under little to no supervision, so how information is vetted is unclear.

Jones’ website responded to Kelly’s interview by calling it a “dishonest hit piece,” an opinion he offered days before the report aired when he “leaked” an audio recording of a pre-interview discussion.