Venus Ramey, the first red-headed Miss Ms. America when she was crowned in 1944, graced bombers as nose art, helped sell war bonds, and once stopped a group of scrap thieves with a snub-nosed .38.

Reuters reports the 92-year-old activist died in her homes state on Sunday. 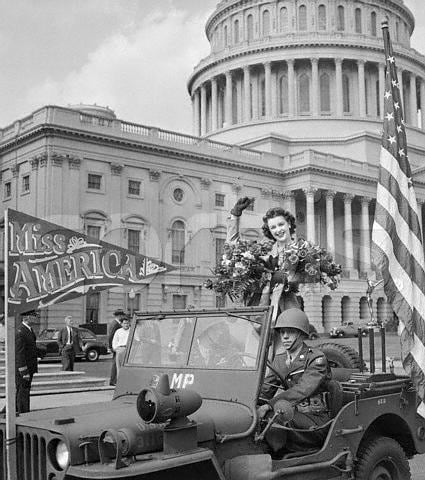 Ramey campaigning for war bonds at an event in front of the Capitol (Photo: Miss America)

The Ashland, Kentucky native left home during WWII to help with the war effort and wound up as a 19-year-old competitor for Miss America after winning Miss District of Columbia. She went on to tour the country for a year, visiting servicemen and supporting the troops by hawking war bonds during a crucial period in the war when national morale was low due to climbing casualties and the public was souring of the campaign.

She was immortalized at the time on both B-24 and B-17G bombers and her contributions are remembered as part of the Library of Congress’ Veterans History Project.

According to the Miss America organization, she not only received a special citation from the Treasury Department but “Miss America was seen as a political activist for the first time, as Venus worked with Senator Kaper of Kansas and Congressman Somner of Missouri in publishing their bills to gain suffrage for the District of Columbia.”

Ramey made headlines a decade ago after when, at age 82, she confronted four intruders on her farm while on her walker after a series of burglaries. Armed with a .38 snub nose, she shot out the men’s tires and held them at gunpoint until police arrived.

“I didn’t even think twice. I just went and did it,” she said at the time. “If they’d even dared come close to me, they’d be 6 feet under by now.” 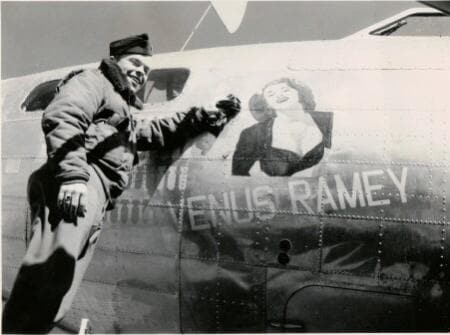 Ramey’s gun use landed her spots on several late night talk shows including The Tonight Show with Jay Leno.

Arrangements are pending and will be announced later by Morris & Hislope Funeral Home.