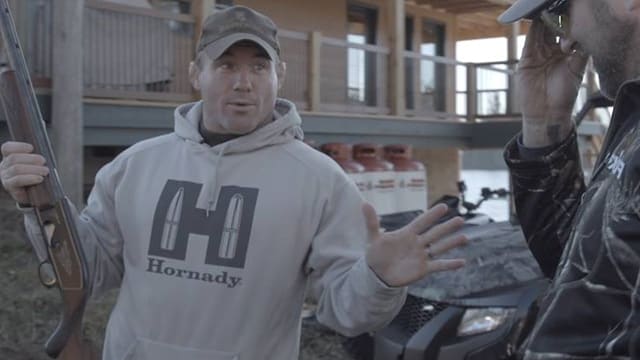 Matt Hughes, left, filming a scene for his show “The Takedown,” which airs on The Sportsman Channel. (Photo: Facebook/The Takedown)

Matt Hughes, a former UFC champion who has become a fixture at major gun-centric events, has been hospitalized due to a car wreck outside of Springfield, Illinois, on Friday.

“Matt is stable and has no broken bones or internal injuries. He has some minor lacerations and bruising and is currently being weaned from his ventilator. He is not yet awake and not responding as we would like to see but we see the fight in him,” his family said in a statement on social media Sunday.

According to reports, Hughes, who lives in Hillsboro, was airlifted to a hospital on Friday after his truck collided with a moving train. Authorities say he approached a railroad crossing point and his truck was struck on the passenger side.

The 43-year-old UFC hall of famer has appeared at SHOT Show, the NRA show and other major events for the past several years. He also hosts a hunting show on The Sportsman Channel called “The Takedown.”

His family has asked for prayers and said they will release more information when it’s available.

“Matt’s strength and determination along with God’s Mercy and Grace will bring him through this,” the said.