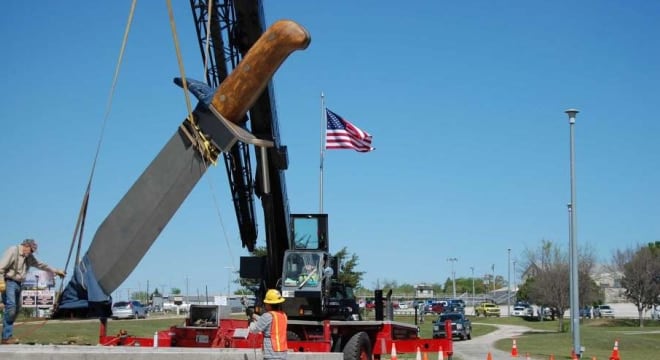 Bowie, Texas is home to the world’s largest Bowie Knife, a blade important to the Lone Star State’s history and legal to carry starting Sept. 1. (Photo: Bowie Chamber of Commerce)

The measure removing several restrictions on the carry of knives, HB 1935, passed the House 131-1 and the Senate 30-1 last month before being signed by Abbott without comment last Thursday.

The language of HB 1935 drops the carry of illegal knives such as “Bowie knives, daggers, dirks, stilettos, poniards, swords, and spears” from Texas penal code on weapons, a crime which currently carries fines of up to a year in jail, a fine of up to $4,000, or both. Previously, one could only exhibit such blades in public if they were part of a ceremony or historical demonstration.

Still off limits for knives with blades over 5.5 inches will be places such as schools, correctional facilities, houses of worship, and bars that derive more than half their income from alcohol sales. The offense for bringing a restricted knife into a prohibited place will be a Class C misdemeanor, which is punishable by a fine of up to $500 and carries no jail time.

Those under 18 will not be able to buy or carry a location-restricted knife.

Texas has long held a historical connection to the Bowie knife in particular, with Alamo hero James Bowie making the long-bladed weapon famous. According to the Texas State Historical Association, during the 1835 Siege of Bexar, Texans used Bowie knives to dig through roofs and walls and to fight Mexican troops in hand-to-hand combat while the early Texas Rangers carried the blades into battle alongside their famous Colt Dragoon revolvers.

During the legislative process to pass the measure, the bill was supported by state carry groups such as Open Carry Texas as well as Knife Rights, a fight that Todd Rathner, director of legislative affairs for the latter, refers to as the “Second front in defense of the Second Amendment.”

“In many instances knife law reform is also ‘criminal justice reform’ that is why we get bi-partisan support in so many places where we work,” Rathner, who is also an NRA board member, told Guns.com in an email. “The Texas bill is the culmination of Knife Rights efforts that began in 2013 with the repeal of the ban on switchblades, enactment of knife law preemption in 2015 and now the elimination of illegal knives from the code.”

Open Carry Texas founder CJ Grisham, welcomed the news of Abbott’s signature, saying, “It has been a shame that for so long Texans have been unable to carry a knife bearing the name of one of the defenders of the Alamo. The Texas legislature has restored a small part of our state pride.”