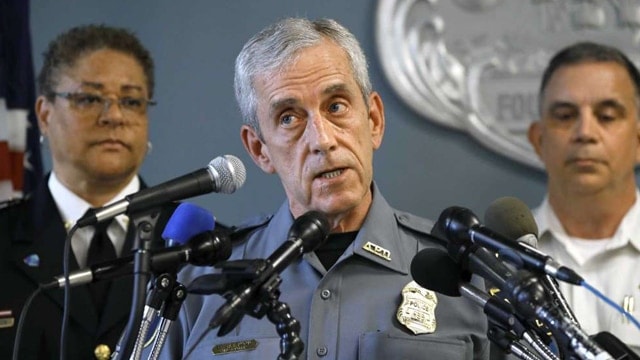 Alexandria Police Chief Michael Brown on Monday said he could “not be more proud” of the officers in his department who helped stop an active shooter at a Congressional baseball practice last week. (Photo: Jacquelyn Martin/Associated Press)

A police chief in Virginia praised his officers Monday for their response to the active shooter situation at a Congressional baseball practice last week.

Alexandria Police Chief Michael Brown said at a news conference Monday that Officer Nicole Battaglia, with less than two years on the job, was instrumental in distracting the shooter so other officers could neutralize the threat.

“She immediately started taking fire from the suspect, and she jumped out of the car without cover and moved towards the fire fight — not away from it — towards it, to the point where she was actually pinned down in the parking lot with a barrage of weapon fire from the shooter,” Brown said. “That act alone, probably, in my opinion, diverted the attention of the shooter away from the other officers allowing them to get themselves in position to deal with the situation that took place.”

The FBI said James T. Hodgkinson, of Belleville, Illinois, opened fire on lawmakers and others with a 9mm handgun and 7.62mm rifle at Eugene Simpson Stadium Park just after 7 a.m. last Wednesday. The ATF said the shooter bought the firearms legally.

Four people were shot in the attack. Louisiana Rep. Steve Scalise is still recovering after he was shot in the hip and was near death upon arriving at the hospital. He’s undergone several surgeries and doctors are optimistic about his recovery. Congressional aide Zach Barth, Tyson Foods lobbyist Matt Mika, and US Capitol Police officer Crystal Griner were also shot.

Griner and her partner, David Bailey, were the security detail assigned to Scalise, who is the majority whip and the number three Republican in the House. Griner and Bailey immediately returned fire on Hodgkinson. Brown said their efforts pushed the shooter back.

“One of them actually went on to the field and got the individual to move down, away from the third baseline towards home plate,” Brown said. “I cannot emphasize the courage that it must have taken those two officers to stop that initial engagement with that shooter.”

Brown said Alexandria Police received a call about the shooting at 7:10 a.m. Battaglia and two other officers arrived on the scene around two minutes later. Within minutes, the threat was neutralized.

“At four minutes and 38 seconds after the initial call that went out to officers, the … shooter was neutralized,” he said. “When you think about travel time, assessing the situation, engaging the suspect and neutralizing the situation, I could not be more proud of the officers of the Alexandria Police Department that showed up that day.”

President Trump visited Scalise and Griner in the hospital last week. The three Alexandria police officers are on routine leave.

“I am very, very proud of them and so is the rest of this police department,” Brown said.