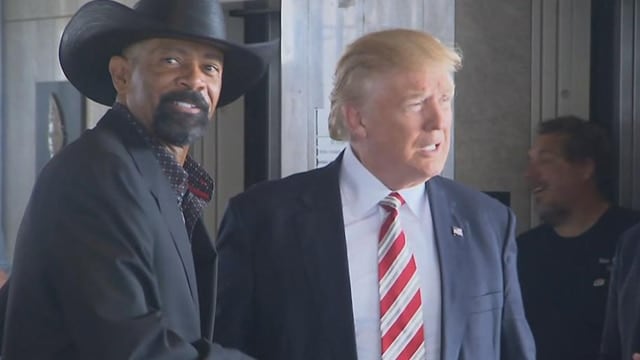 Milwaukee Sheriff David Clarke, known for his abrasive pro-gun and pro-Trump punditry, decided against taking a high level position with the Department of Homeland Security, according to reports.

Clarke formally notified DHS Secretary John Kelly on Friday that he rescinds his acceptance of the agency’s offer, said Clarke’s advisor Craig Peterson in a statement to local media.

Last month, Clarke announced that he would accept an assistant secretary position to head DHS’s Office of Partnership and Engagement, a wing designed to connect the feds with local and state agencies. He was expected to fill the role by the end of June.

Peterson added that last week Clarke met with Trump to discuss other roles and is reviewing options both inside and outside the government. “Sheriff Clarke is 100 percent committed to the success of President Trump, and believes his skills could be better utilized to promote the President’s agenda in a more aggressive role,” he said. Yet, in a social media jab at a political opponent, Clarke said he will be sheriff until January 2019 “at a minimum.”

The reasoning behind Clarke’s decision is unclear. The Washington Post reported his appointment had been subjected to significant delays that contributed to his withdrawal. Speculative reports suggest it may have been a result of controversies surrounding Clarke and his current administration. In the past year, the Milwaukee sheriff has been accused of plagiarizing portions of his master’s thesis, headed a jail in which an inmate died of dehydration, and is the subject of a federal lawsuit accusing him of abuse of power.