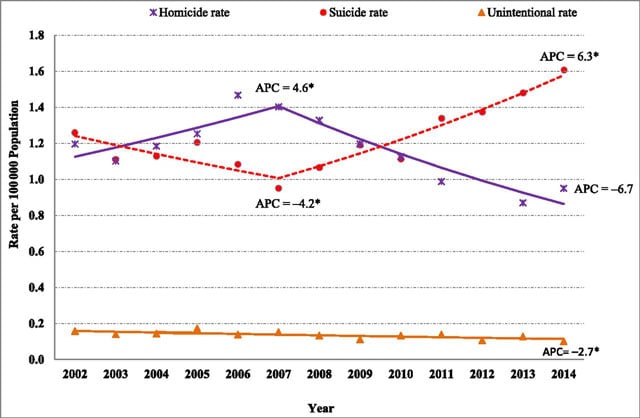 Nearly 1,300 children die from gunshots each year and another 5,790 are treated for gunshot injuries, according to a new study published Monday in the Journal of the American Academy of Pediatrics.

While the sheer volume of gun deaths and injuries among children is staggering, the study shows boys, children between the ages 13-17 and minorities are disproportionately affected.

Males account for 82 percent of deaths, with black males most likely to be killed in gun-related incidents compared with other ages and races. The gun-related homicide rate for black children is nearly twice as much than for children of American Indian descent, four times higher than Hispanic children, and about 10 times higher than the rates for white and Asian youths.

Rates of gun-related suicide were highest among white and American Indian youths, with both rates almost four times that of black children and more than five times the rate of Asian children.

As for unintentional firearm deaths, black youths had the highest rate, ranking twice as high as white kids and four times that of Hispanic children.

Across the board, suicides and homicides were both most common in youth ages 13 to 17 years, while unintentional firearm deaths were more likely to occur in children 12 years old and younger.

Homicides rates are higher in the Southern states and portions of the Midwest, while suicides are more evenly dispersed across the country, with the highest rates occurring in Western states.

The findings come from an analysis of 12 years of data — 2002 to 2014 — collected by the National Vital Statistics System and the National Electronic Injury Surveillance System.

While the study names firearm-related injuries as the third leading cause of death among American youth, the analyses also shows rates of unintentional shootings involving minors have seen a “significant overall decrease ” and youth homicide rates have dropped. However, there remains a “significant upward trend” in suicides of American youth.

Researchers concluded that firearm-related injuries in children continue to be an important concern that substantially contributes to premature death and life-changing injuries in children, but also believe understanding the nature and impact of these incidents is a step toward future prevention.