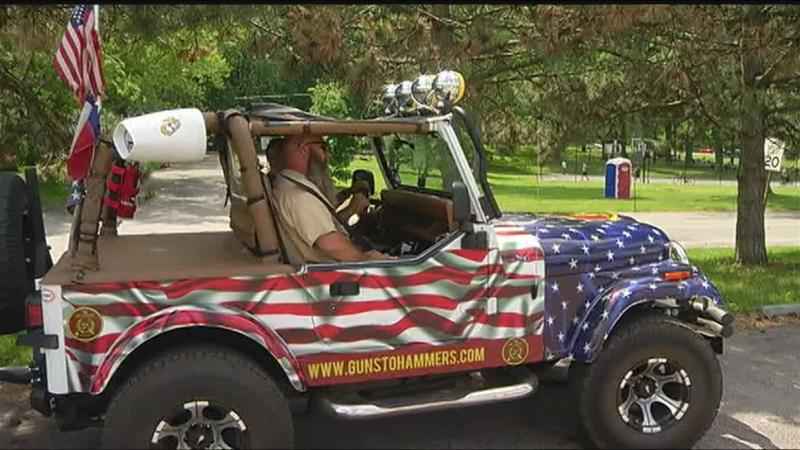 After hitting the road to raise some funds, veterans group Guns to Hammers has landed back in Texas and is ready to help wounded warriors.

The non-profit organization was founded by former Marine J.R. Smith and aims to help remodel the homes of wounded veterans so that they are Americans with Disabilities (ADA)-compliant.

Smith decided to focus his energy on the non-profit after founding a successful Houston remodeling company, H-Towne & Around Remodelers, Inc.

Smith, along with fellow former Marine Kevin Jackson, set out on the road in a red, white and blue Jeep at the end of May to try and bring awareness to their group.

Saturday night, they arrived back in San Antonio and plan on getting started with their work right away, News 4 San Antonio reported.

“I’d love to be able to help a veteran in a wheelchair and modify his home so he can live more independently,” said Smith, before taking off on the trip.

The home of Navy veteran Otis Rankin, who served on a ship off the coast of Vietnam, will be the group’s first project.

Rankin was diagnosed with Parkinson’s disease back in 2005 and his family fears he doesn’t have many years of mobility left.

“Our concern is what’s going to happen when he can’t get out of the wheelchair,” said his daughter Tracy Knight. “How does he get around this house.”

After years of frustration when trying to deal with the VA, the Rankins say they are excited to be the first family Guns to Hammers helps.

“The Rankin family is grateful to be the first of what they hope is many more projects in the future.

“It’s been more of a blessing than I can ever dream of,” said Knight.

The group plans to get started on Rankin’s house within the next few months.