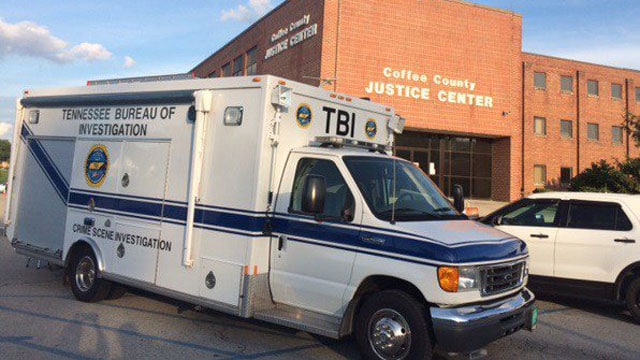 An incident that started at a Coffee County, Tennessee, courthouse Monday afternoon left two sheriff’s deputies injured and the man who shot them – an escaped inmate – dead from an apparent self-inflicted gunshot wound.

The Tennessee Bureau of Investigation is investigating the circumstances surrounding the incident, which unfolded just before 3 p.m.

According to a TBI press release, the suspect, 37-year-old Michael Eugene Bell was in a third-floor holding cell inside the courthouse after having spent the day in court. When Coffee County Deputy Wade Bassett, 71, went to the holding cell to return Bell to the jail, the inmate attacked the deputy, and the two became involved in what was described as “a significant struggle.”

During this time, Bell was able to gain control of the deputy’s gun and subsequently shot Bassett. Bell then ran down the stairs inside the courthouse and as he made his way to the front door, shot Deputy Wendell Bowen, 56, before exiting the courthouse.

About a block from the courthouse, Bell, still armed with the deputy’s gun, went into a home then left again and ran into a nearby yard. When authorities caught up with Bell a short time later, he was found lying in the yard with what appeared to be a self-inflicted gunshot wound to the head. He was pronounced dead at the scene.

Bassett suffered significant injuries to his hand and arm as a result of being shot. He was wearing a bulletproof vest at the time of the shooting and, although the bullets didn’t penetrate the vest, Bassett still suffered injuries as a result of his vest being hit. He was taken to Vanderbilt University Hospital for treatment.

Bowen was shot in the abdominal area and underwent surgery after being transported to Erlanger Hospital. It’s unclear if Bowen was also wearing a bulletproof vest.

At the time of the shooting, Bell was facing kidnapping, domestic assault and other charges.

The Coffee County Sheriff’s Department called it “a sad and difficult day” for the department while thanking the various law enforcement agencies involved for their assistance.

The incident came less than a week after two Georgia inmates shot and killed two corrections officers after escaping during a routine transport in Putnam County, prompting a massive, days-long manhunt for the duo.