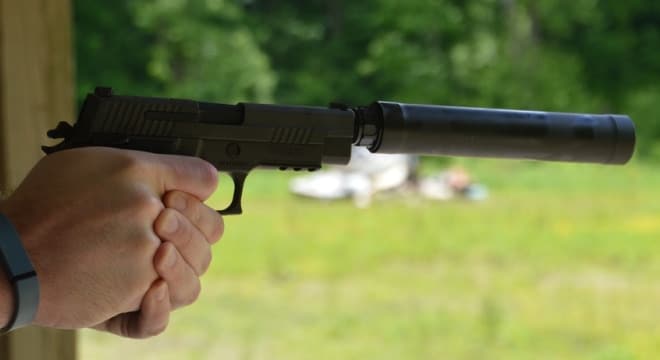 Though a recent high-profile shooting at a Congressional baseball practice did not involve a suppressor, gun control advocates pose the question “what if it had” in an effort to derail pending reform on the items.

In the aftermath of the shooting that left GOP House Whip Steve Scalise among others critically wounded at a practice for a charity baseball game, national proponents for increased gun regulations are claiming the incident could have been worse if the assailant used a suppressor.

“We’re grateful to the law enforcement officers and first responders who bravely protected those present at the shooting and saved lives,” said Robyn Thomas, executive director of the Law Center to Prevent Gun Violence, in a statement. “It’s terrifying to imagine how much more difficult it would be for police to respond to a mass shooting when a gunman has a silencer.”

Prior to last week’s baseball field attack, Americans for Responsible Solutions, spearheaded by former U.S. Rep. Gabrielle Giffords and her husband, astronaut Mark Kelly, asserted that more suppressors in circulation would translate to a public safety risk, painting a portrait of increased police deaths if legislation to make them easier to obtain became law.

In addressing the Alexandria shooting with NPR’s Steve Inskeep, Kelly doubled down and worked the Hearing Protection Act into the conversation, saying the bill would make silencers “readily available for everybody to buy” without pointing out the legislation still requires background checks before legal suppressors could be transferred from a federally licensed dealer.

Another point left out by Kelly is that the HPA only repeals the regulation of various noise modulators under the 1934 National Firearms Act, not state level prohibitions. The shooter in the Alexandria attack legally obtained his guns in Illinois — one of eight states that ban civilian possession of suppressors.

Some are quick to point out that even if the gunman in last week’s shooting had a suppressor, a good one at that, it would have made little difference in the terms of gunfire audibility.

“The criminal used a SKS rifle, with 7.62mm ammunition,” said attorney David Kopel in a column for the Washington Post’s Volokh Conspiracy legal blog.  “Without a suppressor, the sound of a shot from such a gun is 165 decibels. This is more than twice as loud as a jet take-off, if you are 25 meters from the jet. With a suppressor, the SKS would be about 140db. That’s equivalent to being on an active aircraft carrier deck.”

Further, even with upwards of 1.3 million suppressors in circulation nationwide, their comparative use in crime is almost non-existent.