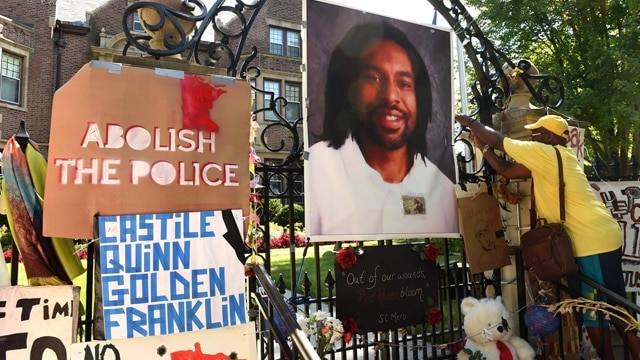 Signs reacting to the shooting death of Philando Castile by a police officer. (Photo: Associated Press)

For Maj Toure, founder of Black Guns Matter, last week’s acquittal of the officer who shot and killed Philando Castile is an unfortunate affirmation of the path he’s been on since 2015.

Toure, a Philadelphia native, founded his group to educate urban communities about the Second Amendment. On Tuesday, just days after the verdict, Toure was on his way to Minnesota to give a seminar to residents in the Twin Cities.

For Toure, it’s about life and death. “We’re at a point where now we have to re-inform urban America…how to get through traffic stops without being murdered,” he said.

Jeronimo Yanez, a Mexican-American, was acquitted of manslaughter for shooting Castile, a 32-year-old black man, during a traffic stop last July in the St. Paul suburb of Falcon Heights. Castile told Yanez he had a firearm. In dash cam video released this week, Yanez can be heard telling Castile not to reach for the weapon. Seconds later, Yanez fired seven rounds, five of which hit Castile.

His girlfriend, Diamond Reynolds, was sitting in the passenger seat and streamed the aftermath of the shooting on Facebook Live. The video shows a frantic Yanez yelling and pointing his weapon at Castile, who sat slumped over and bloodied in the driver’s seat, slowly dying.

Jurors saw both videos. After just a couple dozen hours of deliberations last week, the jury found Yanez not guilty of all charges. Toure said the whole ordeal exposes the flaws of a biased system. But when he talks about what happened to Castile, his language, his worldview, it has the same ring to it as every other pro-gunner Constitutionalist.

“We, the American people, have gotten so far away from the Constitution that when these homicides — and that’s what they are, murders — happen, there’s no change. There’s no uproar. This is the exact type of tyranny that the forefathers warned about,” he said. “And I think that every firearm owner and every Second Amendment advocate, white or black, should recognize the amount of tyranny that we’re justifying and thinking is okay.”

On July 8 of last year, just two days after Yanez pulled Castile over, the National Rifle Association said the shooting was “troubling.” Calling themselves the “nation’s largest and oldest civil rights organization,” the group didn’t say much else in the statement. “Rest assured, the NRA will have more to say once all the facts are known,” it said. Yet, almost a year later, and after Friday’s verdict, the group hasn’t had anything more to say, and gun owners and the media have taken notice.

Outside his NRA channel, NRA commentator Colion Noir slammed the ruling on social media over the weekend. Noir, a black man, began his statement by telling a personal story from his youth in which he and his friends were pulled over, and an officer pointed a gun at him.

“I couldn’t understand why the cop felt so threatened by us,” he said. “I remember asking myself, If we were four white teens would he have acted the same way?”

Noir said he despises race baiting, saying it “cheapens and undermines every legitimate cry of racial injustice and breeds a sense of apathy in people who would otherwise be sympathetic.”

But in the case of Yanez, race is hard to ignore.

“It’s very possible Yanez was indifferent about Philando’s race,” said Noir. “However, because of the negative stereotype reinforced in the media about black men and guns, it wouldn’t completely surprise me if Yanez felt more threatened by Philando because he was black. This is the same negative stereotype that I’ve been trying to combat for years now.”

For Rep. Cedric Richmond, a Democrat from Louisiana and the chairman of the Congressional Black Caucus, the acquittal of Yanez “tells African-Americans across the country that they can be killed by police officers with impunity, even when they are following the law.”

He told the Associated Press the verdict means “the Secondment Amendment does not apply to (black people).”

Toure imagined a world in which the script had been flipped. What if Castile had fired on Yanez because he “feared for his life, because an officer that looked like he could have been white had his hand on his firearm, and he killed that officer? How would that have worked out for Mr. Castile?” Toure asked.

“Most people of color in America fear for their lives in interactions in traffic stops with law enforcement officers because of this type of shit,” he said.

“It almost brought me to tears,” said National African American Gun Association founder Philip Smith in an interview with Guns.com. “I’m tired of it. I’m tired of seeing young, black men shot — for whatever reason.”

“Maybe I’m the old school guy here, but I think a little conversation goes a long way,” he said, talking about Yanez. “‘Move carefully, sir. I don’t know who you are right now. We need to check you out. Just don’t move right now and let’s have a conversation.’ Stuff like that needs to take place with officers when they’re dealing with anybody, particularly African American men, rather than just jump to reaction.”

In a similar vein, but a step further, the American Civil Liberties Union in Minnesota on Friday called for new standards of policing following the verdict. “We must end the prevailing policing paradigm where police departments behave more like occupying forces, imposing their will to control communities,” said Teresa Nelson, the group’s interim executive director.

Nelson said two Supreme Court decisions from the 1980’s allow officers to use deadly force when an officer on the scene could reasonably fear for their safety. These decisions allow officers to commit violent acts even if the officer acted recklessly or had ill motives, she said. Philip Smith agrees.

“Protesting does no good,” he said. “Screaming and hollering, crying, that doesn’t do any good. We need to legally look at the Tennessee v. Garner decision…and we need to chip away at that law, because that law is the basis of everything that officers do nowadays in terms of, ‘I fear for my life. I felt I was gonna get shot.’ That needs to be erased and we need to have a new standard.”

Toure said, at the core of the issue, all the race talk is irrelevant. It comes down to government overreach.

“This is tyranny. This is it. This is literally it. I don’t care what the race is,” he said. “We can make it about black males. But I want White America, Spanish America, Indian America, Latin America, Asian America to recognize that this is a far cry from what the Constitution and the Bill of Rights meant. And that can happen to any of us. So all of us need to be very, very careful about recognizing that fact and getting on a course to correct it,” he said.

“We are patriots, period. A patriot is a person that is willing to defend their countrymen and women from corrupt portions of government,” Toure said. “And right now our government is failing large sections of the American population and looking real fuckin’ tyrannical.”

Toure, who’s funding his nationwide seminar tour through a GoFundMe page and merchandise sales, said he’ll keep empowering people until he doesn’t have to.

“I’m not gonna stop until the need for this work is obsolete,” he said.