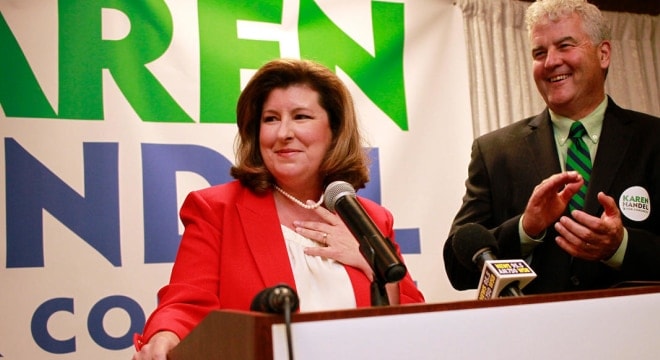 Republican Karen Handel on Tuesday won a special election for a U.S. House seat against Democrat Jon Ossoff in the most expensive congressional race in history.

The hard-fought campaign, in which Democrats poured money and effort to flip the traditionally red Georgia 6th District seat left open when Republican U.S. Rep. Tom Price was sworn in as Secretary of Health and Human Services, was won by Handel with 52 percent of the vote.

While the Center for Responsive Politics documented that over $56.7 million had been spent in the short campaign, viewed by many as a referendum on the Trump administration, gun politics also played a part in the contest.

Ossoff, who outraised his opponent by a margin of over 6 to 1, was endorsed by Georgia Congressman John Lewis, a Democrat well-known for his stance on gun control, then publicly sparred with Handel over the state’s controversial campus carry measure and was embraced by gun control groups.

“Jon Ossoff stands with the majority of American voters on the issue of gun violence,” said the Pride Fund to End Gun Violence in their endorsement last month. “Ossoff will support common-sense background checks that keep Georgia communities safer.”

Handel, on the other hand, was publicly endorsed by the National Rifle Association, who pointed out that she had supported several gun rights reforms including expanded concealed carry reciprocity.

“The unhinged left is endorsing and applauding shooting Republicans,” says the spot. “When will it stop? It won’t if Jon Ossoff wins on Tuesday because the same unhinged leftists cheering last week’s shooting are all backing Jon Ossoff and if he wins, they win.”

While both campaigns disavowed the ad’s content, Moms Demand Action and Everytown condemned it, saying it was “disgusting to politicize this national tragedy and use it to get voters to the polls.”

When Handel joins the House as the first Republican woman to be elected to Congress from Georgia, she will bring the GOP majority there to 239-193.

The New York Times described the race in the end as “demoralizing for Democrats.”