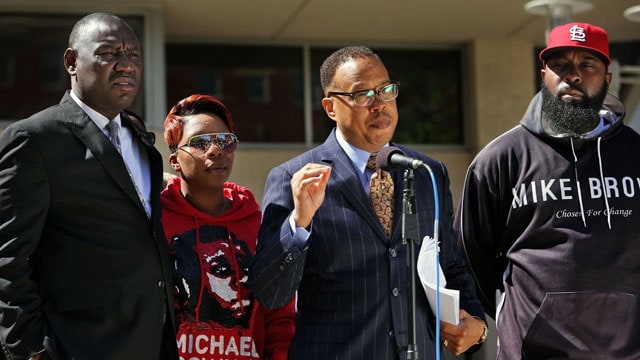 Attorney Anothony Gray stands with the parents of Michael Brown as they announce the filing of the lawsuit in 2015. (Photo: St. Louis Post-Dispatch)

The city of Ferguson and the parents of Michael Brown, the unarmed teen killed in a 2014 police shooting, which sparked a national outcry and inflamed racial tensions in the St. Louis suburb, settled a wrongful death suit in federal court Tuesday.

Senior District Judge E. Richard Webber awarded Michael Brown, Sr. and Lezley McSpadden an undisclosed sum for their son’s death while dismissing other charges against the city and police officials.

In his opinion, Webber ordered the settlement amount to be sealed from public view, but describes it as “fair and reasonable compensation for this wrongful death claim and is in the best interests of each plaintiff” and covers “a reasonable amount of attorneys’ fees and litigation expenses.”

“Disclosure of the terms of the settlement agreement could jeopardize the safety of individuals involved in this matter, whether as witnesses, parties, or investigators,” the opinion says. “The public policy to consider records open is outweighed by the adverse impact to Plaintiffs.”

Brown’s parents filed the lawsuit in 2015, less than a year after their son’s death. The complaint named the city, its former police chief, and Darren Wilson, the officer who shot and killed their son.

Their case cited police hostility toward the black community and excessive and unreasonable force by Wilson as the cause of their son’s death. Some witnesses originally claimed Wilson gunned down the teen as he held his hands in the air, but those statements were later discredited.

Wilson, who was cleared of any wrongdoing, maintained he shot Brown in self-defense. Evidence, including witness statements and forensics, backed his account.

The case also brought scrutiny to Ferguson by the U.S. Department of Justice, which found that the city’s police used discriminatory practices when patrolling minority neighborhoods. The Justice Department later sued Ferguson after the city voted against reforming its police department.

Brown’s death and events that followed — such as peaceful protests, riots and other civil unrest — raised questions into the national debate about police tactics and race relations.