Are left-wing groups getting more violent? 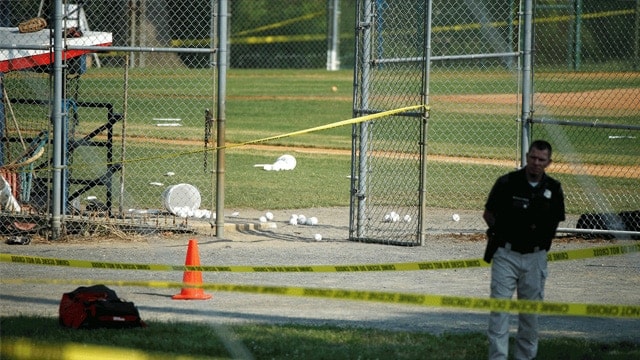 This month’s shooting at a Congressional baseball practice has ignited media chatter about whether there’s a resurgence of left wing extremism.

Many experts have written about or given interviews on the subject in the last week, and most of them agree that it’s definitely something to keep an eye on. But are the groups getting more violent? Well, it’s complicated.

Four people were shot in the incident on June 14, including Louisiana Rep. Steve Scalise, who was near death when he was taken to the hospital. On Wednesday, his condition was upgraded to fair. The gunman, James Hodgkinson, was killed in a shootout with officers. The FBI on Wednesday released a report and held a press conference, saying Hodgkinson acted alone and characterized his attack as more spontaneous than a planned act of terror.

“Hodgkinson appears to have held strong liberal views, but so far no connection to left-wing extremist groups or movements have emerged,” wrote Oren Segal, the director of the Anti-Defamation League’s Center on Extremism, just hours after the shooting. “His views seem to have been within the mainstream of the American left, which makes his act of violence unusual. Generally, people closer to the fringes of the ideological spectrum are more likely to engage in violence.”

“What we’re seeing is the democratization of extremism and the tactics of radicalism,” Brian Levin told Vice News last week. Levin is a former New York City police officer who now serves as the director of the Center for the Study of Hate and Extremism at California State University.

Levin said he’s documented nearly two dozen incidents in California where people on both sides of the spectrum turned to violence at political events. “I’ve been warning about this, and nobody gave a shit,” he said.

A group that’s risen to the mainstream in recent months is the Anti-fascists, or Antifa for short. Members of the group usually cover their faces and rely on anonymity.

“When we have anti-fascist counterprotests — not that they are the same as white supremacists — that can ratchet up the violence at these events, and it means we can see people who are violent on their own be attracted to that,” Segal said. “I hate to say it, but it feels inevitable.”

Anti-fascists lit garbage cans on fire in Washington, D.C., on inauguration day and have been involved in clashes at UC Berkeley and other demonstrations in recent months.

Chris Hamilton, an extremism expert at Washburn University in Kansas, said the anti-authoritarian lines are blurring. For instance, if one listens to left-wing talk radio and spends time browsing far left websites. Or, their messaging and sentiments echo what they’ve been seeing and hearing from the right for years.

“These days, that kind of sentiment is popping up in the middle and on the left; it’s not just in the sovereign citizen movement,” he said. “I’m really worried about rising civil strife in the U.S.”

Segal said more groups willing to turn to violence just adds to an already crowded field. “This is a dangerous development at a critical time, as the U. S. already faces serious violent threats from white supremacists, anti-government extremists and domestic Islamic extremists,” he said.

Mark Pitcavage, a fellow at the Anti-Defamation League’s Center on Extremism, said the far left has been active, but hasn’t been “particularly violent for some time.” He moved away from analyzing violent clashes at political events, and focused on which groups have been responsible for murder.

“In the past 10 years when you look at murders committed by domestic extremists in the United States of all types, right-wing extremists are responsible for about 74 percent of those murders,” he told NPR.

As for last week’s attack on Republican lawmakers, Pitcavage downplayed the significance as it relates to leftist extremism. “One act does not a trend make,” he said.

“But I am concerned that, in this highly polarized and divided society, more people who have stances that fall within the mainstream, on the left and right alike, may consider political violence an attractive option.”