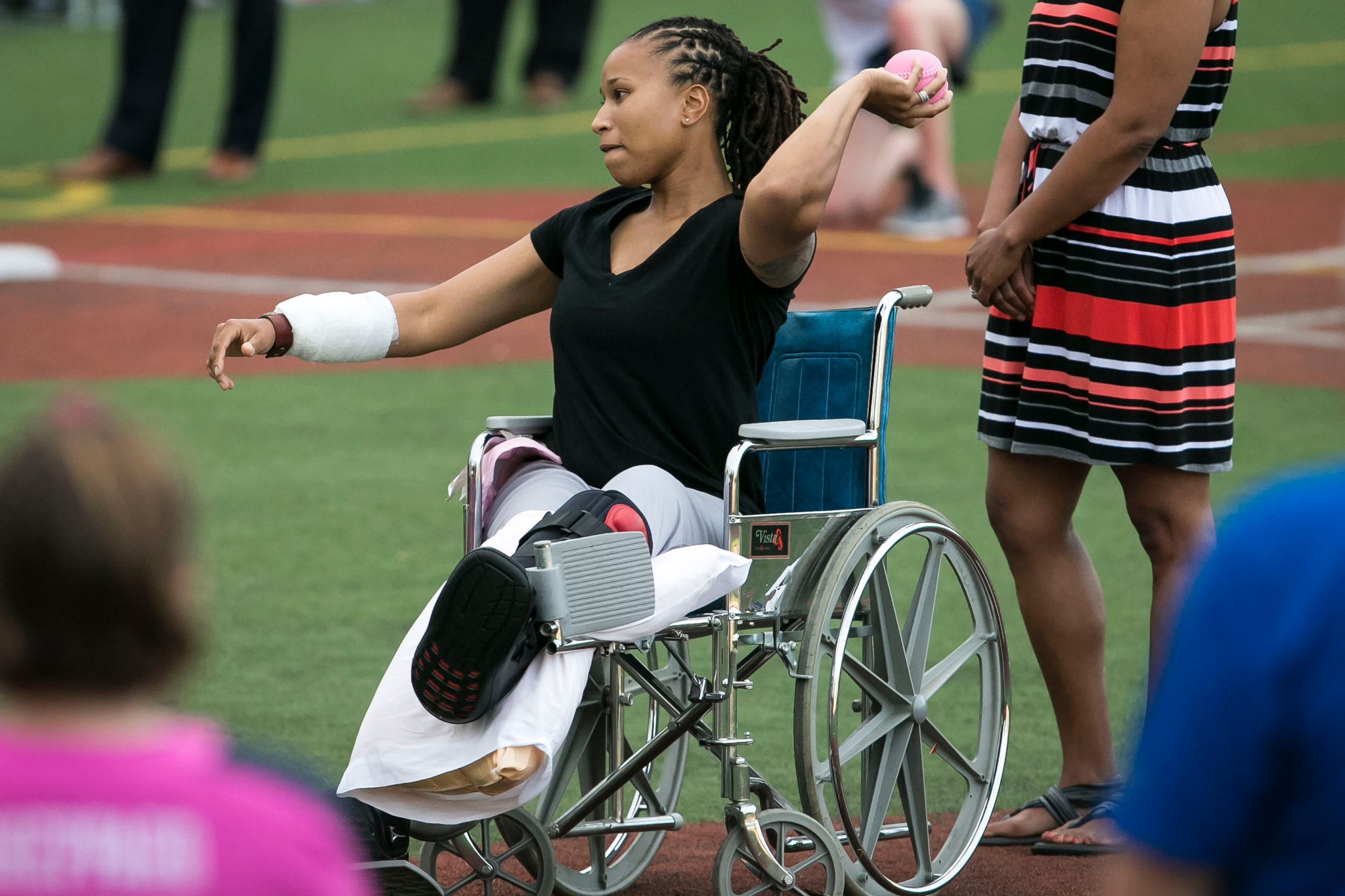 One of the Capitol Hill police officers credited with saving lives at last week’s shooting in Alexandria, Virginia threw the first pitch Wednesday at the women’s Congressional Softball Game for charity.

Special Agent Crystal Griner tossed the first pitch from her wheelchair exactly one week after 66-year-old James Hodgkinson shot her and three others — including House Majority Whip Steve Scalise — during the June 14 attack at a Republican baseball practice.

“She is amazing, and she’s a hero,” retired Capitol Police Chief Kim Dine told CBS News of Griner one day after the shooting. “She epitomized what being a hero’s all about.”

The practice was nearly over when the gunman, a disgruntled former home inspector from Illinois who lived in a van parked at the YMCA across the street, opened fire on two dozen Republican congressman and staffers gathered at the Eugene Simpson Park Stadium in the Del Ray neighborhood of Alexandria, about 10 minutes outside of Washington, D.C.

Griner and Bailey returned fire on the gunman in a heroic act top ranking GOP lawmakers insist saved lives that day and “prevented a massacre.”

“I expressed our profound gratitude to them,” House Speaker Paul Ryan said on the chamber floor in the hours after the shooting. “It is clear to me, based on various eyewitness accounts, that without these two heroes, Agent Bailey and Agent Griner, many lives would have been lost.”

The gunman shot Griner in the ankle and struck Bailey, as well, according to multiple media reports.

The Alexandria Police Department arrived on the scene three minutes into the attack and joined in the firefight against the shooter — who died of a gunshot wound at a D.C. area hospital hours after the attack.

The Federal Bureau of Investigation said Wednesday the gunman acted alone in a random act of violence.

“I think he — by his posts on social media — he spoke a lot about anti-Republican rhetoric,” said Timothy Slater, an FBI special agent in charge at the Washington field office, during a press conference Wednesday. “I can’t speak to exactly what he was thinking at the moment or his motive, but I think as we continue to look at his communications and look at his online footprint, I think we’ll have a better indication of maybe what his thoughts were closer to why he did (opened fire).”

Federal investigators revealed the gunman had a list of lawmakers’ names in his pocket during the attack, but Slater said no evidence found suggested it was a hit list of any sort.

The softball game, now in its eighth year, pits congresswomen against female journalists to raise money for the Young Survivor Coalition, a breast cancer organization.

The media’s team, the Bad News Babes, bested the congressional team 2-1. The Hill reported record breaking turn-out for the game.