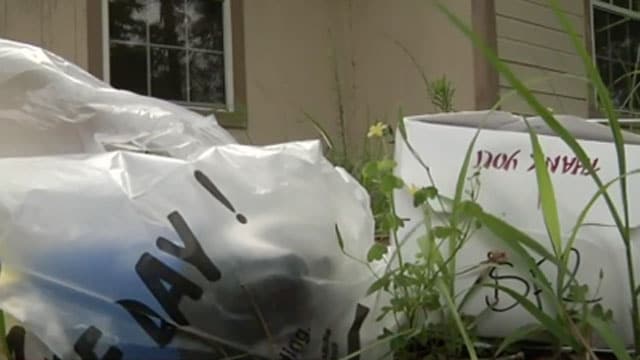 The driver first threw the food at the suspects before retrieving his handgun. (Photo: News 4 Jax)

An attempted robbery in Jacksonville on Tuesday evening was foiled by the intended target when he pulled a gun on his assailants.

According to a press release from the Jacksonville Sheriff’s Office, one of the suspects was shot, a second held at gunpoint, while the third suspect remains at large. The victim, however, was uninjured.

Police say the suspects placed an order with Hot Wok Chinese around 5:30 p.m. to be delivered to an address that was later determined to be an abandoned house.

When the driver, who has not been publicly identified, arrived at the house, he pulled into the driveway, walked up to the front door and knocked. The driver was greeted by two men, one of whom was armed with a gun with a laser trained on the victim’s face. The victim described the gun as a “black semi-automatic pistol.”

The suspects motioned the driver to enter the house as they said something to the effect of, “Come inside, it’s over, come inside.” The driver then turned around to leave, but was met by a third man who was also armed with a gun. The victim described the third suspect as having something, like a shirt, wrapped around his face, as to hide his identity.

Unbeknown to the suspects, the delivery driver was also armed. The delivery driver threw the bag of food at the third suspect, backed away from the door, quickly drew his Glock, and fired four to five shots at the suspects. The driver continued to back up until he crossed the street, then yelled out for neighbors to call the police.

When officers arrived, the driver was still holding one of the suspects at gunpoint, but the remaining two had fled from the scene. A short time later, police received a call from a man claiming he had been shot at a different location. Authorities soon determined that man was a suspect in the Chinese food robbery.

The two suspects were arrested and the third remains at large. None of their names have been released, but they are said to be in their early 20s.

Local reports indicate the delivery driver was carrying less than $200 at the time of the attempted robbery.