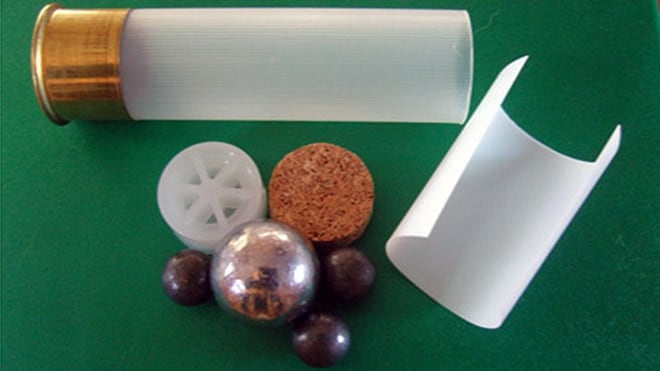 In the days when smoothbore flintlock muskets were the weapons of choice for armies worldwide, one of the tricks used by soldiers to increase the effectiveness of their less than accurate weapons was to add a few pellets of buckshot to the usual payload of a large diameter lead roundball. Known as a “Buck and Ball” load, the idea behind the configuration was to combine the decisive impact of a big, heavy lead ball with the potential for hits on multiple targets afforded by the buckshot. Such a load was reported to have been particularly effective in combat situations where tightly packed rows of troops were firing on each other at close ranges. In the Americas, buck and ball musket loads were used in conflicts as late as the Civil War.

The concept of a buck and ball load may be an old one but it is not forgotten. Two fairly well-known products that contain such payloads are Multi-Defense Buckshot offered by the Italian ammo maker Centurion and the 12 gauge PDX1 rounds offered by Winchester.

The payload of the Centurion shells consist of a .650 inch diameter roundball placed atop six #1 (.30 inch diameter) buckshot pellets inside a 2.75 inch hull. The advertised muzzle velocity is 1300 f/s.  The 2.75 inch 12 PDX1 rounds pack a payload consisting of three 00 buckshot pellets seated over a one ounce rifled slug, all of  which leave the muzzle at an advertised velocity of 1150 f/s.

I was curious to see how such loads would group and pattern at ranges of 15 feet and 25 yards, so I obtained a box of both the Centurion and the Winchester buck and ball offerings.  Additionally, I was unable to resist the urge to make my own 12 gauge buck and ball handload. Feeling a perhaps unhealthy need to outdo the manufacturers in terms of payload mass and projectile diameter, my homemade buck and ball rounds consisted of three 0000 (.380 diameter) buck pellets atop a .718 inch diameter, 550 grain lead roundball, all inside a three inch Fiocci hull. The powder charge consisted of 35 grains of Alliant Blue Dot and the payload was buffered and wrapped in a Teflon sleeve. Total payload mass was just under 1.875 ounce.

Since this load is essentially my own invention, anyone attempting to duplicate it does so at their own risk. It worked well in my Benelli Nova, but the results may vary. Since I do not chronograph shotshell loads, the velocity of the handload is unknown.

Each load was tested by first firing three rounds at a 14 inch by 11 inch target at a range of 15 feet, which I consider to be an “across the room” distance. The loads were then tested at a range of 25 yards by firing three rounds of each at a 22 inch by 14 inch target. All loads were fired through my pump action Benelli Nova with an 18 inch barrel and fixed improved cylinder choke.

At 15 feet, the roundball portion of the payload clustered into a cloverleaf group at the very center of the 14 inch by 11 inch target. It was hard to tell exactly how many buckshot hit the target as some holes made by the pellets could have easily been obscured by the holes made by the roundballs and wad components. The maximum diameter of the pattern was eight inches. 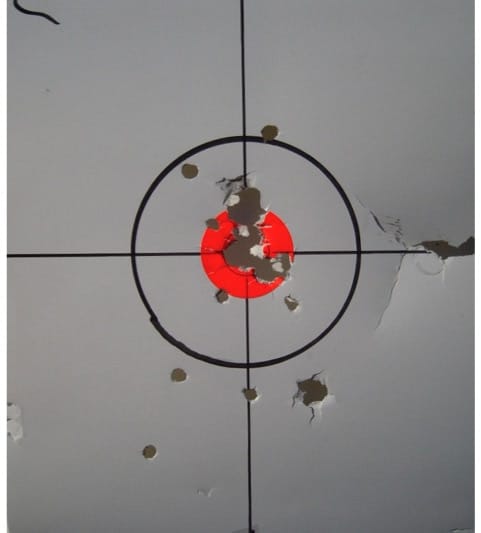 The photo above shows the results of the 15 foot test of the Centurion load. The contents of all three rounds clustered fairly tightly near the center of the target. (Photo: Jason Wimbiscus)

At 25 yards, the roundballs strung along a six inch diagonal line near the center of the target. I could verify that 12 of the 21 buckshot hit the target. Some of the holes made by the buckshot may have been obscured by the holes punched by the roundballs while the rest likely did not hit the paper. Of all loads tested during the range session, the Centurions recoiled the least. 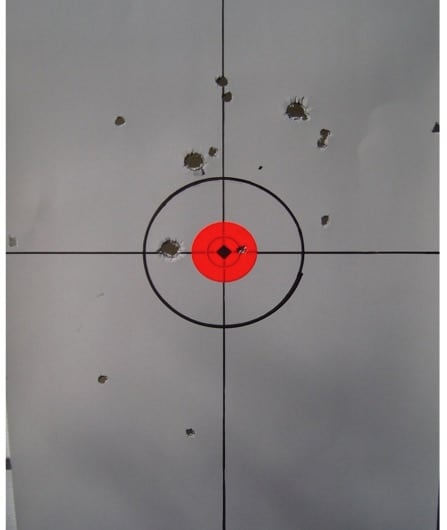 At 25 yards, the pattern opened up significantly. Some of the buckshot missed the target entirely. (Photo: Jason Wimbiscus)

At 15 feet, the three slugs tore a ragged hole through the targets bullseye and I was able to verify that all nine buckshot stayed on target. At its widest point, the pattern measured eight inches diameter. 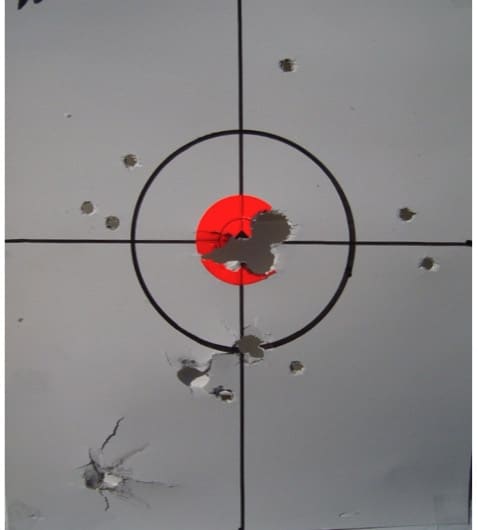 The photo above shows the results of the 15 yard, three shot group of Winchester PDX1 ammo. The slugs tore a ragged hole and all buckshot hit the paper. (Photo: Jason Wimbiscus)

At a distance of 25 yards, the slugs grouped into three inches just above the bullseye, but only three buckshot wound up on the paper. Recoil was on par with most other one ounce 12 gauge slug loads I’ve fired. 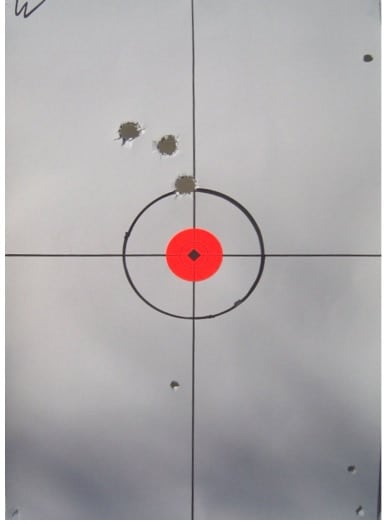 At 25 yards the slugs from the PDX1 rounds printed a reasonably tight group. Only three of 21 buckshot pellets struck the target. (Photo: Jason Wimbiscus)

The three shot group/pattern yielded by my handload at 15 feet put all roundballs within 1.5 inches of each other and all nine buckshot on the target for a total spread that was seven inches at its widest point. Upon extending the distance to 25 yards however, the pattern opened up significantly. The roundballs grouped into a triangular pattern that was four inches on each side and only three buckshot hit the paper. 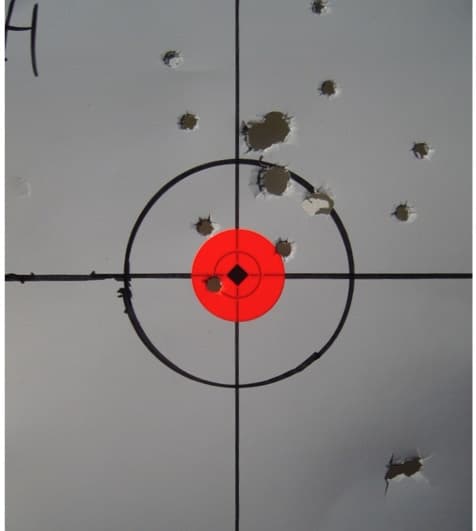 The target above shows the group and pattern printed by the author’s buck and ball handload. The roundballs clustered close together and all the buckshot stayed inside a seven inch circle. (Photo: Jason Wimbiscus)

While I did not test any of the above loads for terminal performance, it stands to reason that all three loads would create a devastating wound in a home invader at the distances commonly found within the average home. Admittedly, at such close ranges a standard slug or buckshot load will also create a devastating wound. Additionally, I’m not convinced that at close ranges, the 12 gauge buck and ball loads increase the likelihood of a hit when compared to standard buckshot loads. 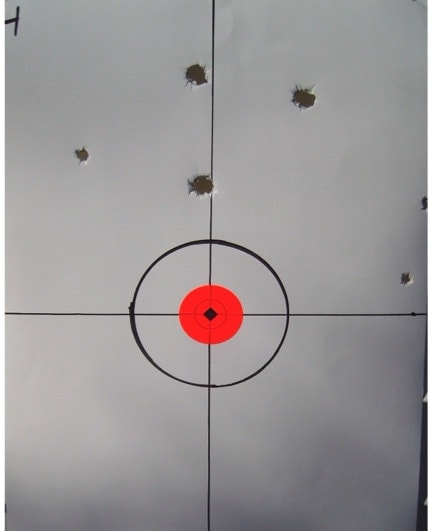 At 25 yards, the roundballs in the author’s handloads grouped acceptably close together. Only three buckshot pellets struck the paper. (Photo: Jason Wimbiscus)

At longer ranges, the roundballs are still accurate enough to stay within a torso-sized target, but a bulk of the buckshot fly wide of the target, resulting in unaccounted for projectiles. Additionally, heavy slugs and roundballs may create an overpenetration hazard in some situations.

While it may be debatable as to whether or not modern buck and ball loads offer a practical advantage over standard slug and buckshot loads, they may be just the right ammo to grab in the event that a column of angry redcoats gathers on your lawn.