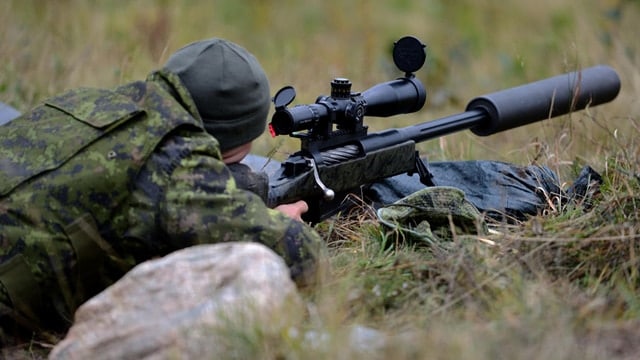 Military officials confirmed Thursday that a sniper with Canada’s strategic-level counter-terrorism forces smashed the record for longest confirmed kill shot in military history with a distance of 3,540 meters.

A member of the secretive Joint Task Force 2 fired the deadly round from a McMillan TAC-50, killing an ISIS fighter in Iraq from more than 2 miles away. The kill shot crushes the previous record, which was 2,475 meters, according to Toronto’s Globe and Mail.

“The shot in question actually disrupted a Daesh [Islamic State] attack on Iraqi security forces,” a military source told the paper. “Instead of dropping a bomb that could potentially kill civilians in the area, it is a very precise application of force and because it was so far way, the bad guys didn’t have a clue what was happening.”

The sniper fired the world record round from a high rise during an operation sometime in the last month. The bullet took less than 10 seconds to strike the insurgent. Officials say the kill was verified with video footage.

“Hard data on this. It isn’t an opinion. It isn’t an approximation. There is a second location with eyes on with all the right equipment to capture exactly what the shot was,” an official said.

The two man sniper team had to account for distance, wind, and the curvature of the earth. The kill required not only precise ammunition and weaponry, but good eyes and some math — not to mention training.

“Canada has a world-class sniper system. It is not just a sniper. They work in pairs. There is an observer,” a military source told the Globe and Mail. “This is a skill set that only a very few people have.”

Canadian Armed Forces officials wouldn’t provide details on when or how the kill took place. JTF2 operations are classified and the government doesn’t often comment about what they’re up to. Canadian forces in Iraq serve an “advise and assist” function, and a maximum number of 830 members are approved to take part in operations.