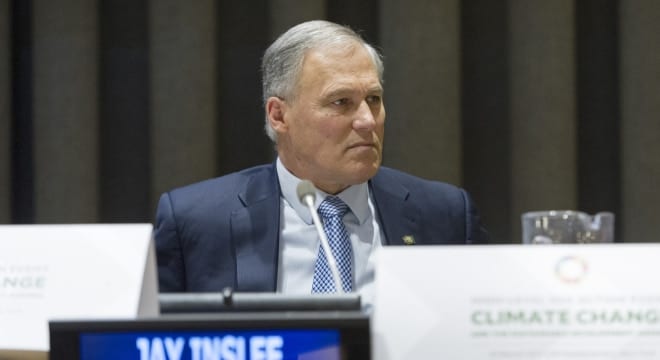 “The Clock is running out,” warned Gov. Jay Inslee as the current budget it set to expire June 30. (Photo: governor.wa.gov)

Officials have warned that if a budget is not worked out in coming days, state services supporting gun sales and licensing could be put on hold.

With the Washington Legislature unable to agree on a budget, Gov. Jay Inslee this week called a third special session to deliver a state budget before the current one runs out on June 30. If lawmakers can’t make it work, among the list of services slated to be furloughed July 1 in a partial government shutdown are those concerning firearms dealer and concealed pistol licensing.

“The clock is running out,” Inslee said. “There are nine days remaining in the current fiscal year. Nine days that we need the legislators to buckle down and produce a two-year biennial budget for the state of Washington.”

As reported by KOMO News, 32,000 state employees are getting layoff warning slips, sparking angry rallies with attendees urging lawmakers to produce a budget.

The National Shooting Sports Foundation, the trade group for the firearms industry, warns the shutdown could provide heartburn to both gun shops and gun owners.

“Firearms dealers and gun owners have reason to be wary of the legislative impasse,” said NSSF Senior Vice President Larry Keane in an opinion piece. “Washington already has some of the most restrictive laws relating to gun sales and transfers.”

The state is one of nine states that act as a partial point of contact for National Instant Criminal Background Check System database checks, with dealers required to use both NICS and two other state databases maintained by the Washington State Patrol and Washington Department of Social and Health Services to vet potential gun buyers. Washington is also one of eight states that require universal background checks for all transfers of firearms, including private sales. Those seeking firearms dealer or concealed pistol licensing also must go through state agencies.

Gun rights groups described the looming shutdown threat as a bellwether against incremental intrusions on the right to keep and bear arms.

“This is one of the many reasons why gun rights groups oppose giving government more power over firearms sales and ownership,” Alan Gottlieb, founder and executive vice president of the Bellevue, Washington-based Second Amendment Foundation, told Guns.com in an email. “It can be used to stop the normal exercise of our constitutional rights.”