A 41-year-old man was killed by his accomplice during a mishap as the two attempted to burglarize a home in Bibb County, Georgia, Monday morning.

The deceased man was identified by the Bibb County Sheriff’s Office as James Robert Young, Jr., of Macon. His accomplice, who remains at large, was identified as 16-year-old Aurie Mathis.

According to the sheriff’s office, Young and Mathis broke into the home just before 10 a.m., but they were interrupted by the homeowner, who yelled at them as they made their way to the front door.

Young was carrying a television that belonged to the homeowner but dropped it before he got to the door. At that point, Mathis, who was armed with a handgun, turned and fired a single shot, which struck Young in the head. It’s unclear if Mathis intended to fire a shot or if he was perhaps startled by the falling television. 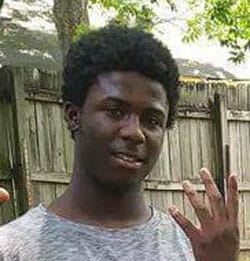 When deputies arrived a short time later, Young was lying in the doorway of the home. He was pronounced dead at the scene. The homeowner, although shaken up over the ordeal, was physically unharmed.

Mathis, who is now wanted for felony murder, remains at large. He is described as 16 years old, 5-foot-6 and weighing around 140 pounds. Authorities say he should be considered armed and dangerous.

The investigation is ongoing. Anyone with information about the break-in or Mathis’ whereabouts is asked to contact the Bibb County Sheriff’s Office at 478-751-7500 or Macon Regional Crime Stoppers at 1-877-68CRIME.

According to reports, at the time he was killed, Young had been out of prison for less than a year after serving a four-year sentence for burglary. He had been arrested a total of 35 times in Bibb County, six times for burglary.