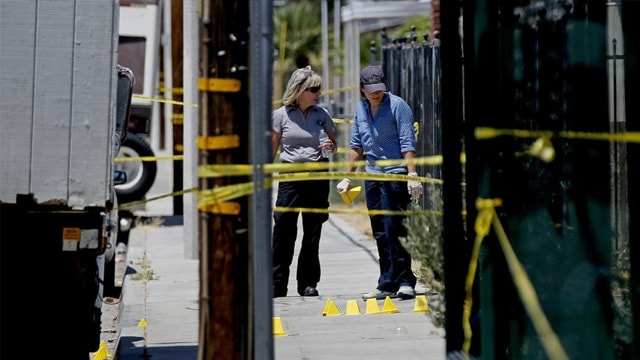 Investigators work the scene in Palmdale, California after 17-year-old Armando Garcia-Muro was struck in the chest by a bullet meant for a dog. (Photo: Gary Coronado/Los Angeles Times)

A teenager in California is dead after Los Angeles County sheriff’s deputies shot at an aggressive pit bull, and their bullets ricocheted and hit the teen in the chest.

It happened just before 4 a.m. Thursday in Palmdale, California, according to the Los Angeles Times. Officials say the deputies likely didn’t see 17-year-old Armando Garcia-Muro in the darkness.

Prior to the shooting, the dog had bitten one of the deputies in the leg. Garcia-Muro restrained the dog and the deputies went to call for backup and get medical attention for the bitten deputy. But the 60 to 65 pound dog got loose again and charged at the five deputies. Two of them opened fire, shooting between six and eight times.

The dog was hit and retreated. As the deputies tried to contain the pit bull, they noticed Garcia-Muro on the ground.

“He would give his life for anybody,” said his mother, Roberta Alcantar. “He was a very loving person.”

“He may have been struck by one of the skip rounds in what we’re calling an extremely, extremely unfortunate incident,” said Capt. Christopher Bergner of the Sheriff’s Department Homicide Bureau. “Our initial impression was [the deputies] didn’t even see the individual coming around from the side of the building.”

The deputy who was bitten was also struck by a bullet fragment. The dog survived the shooting, but is set to be euthanized.

The deputies who fired their weapons will be on desk duty, per policy, while the incident is investigated.