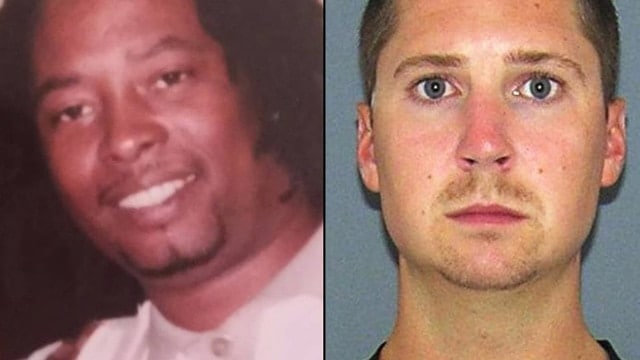 For the second time in a year, a jury on Friday couldn’t reach a verdict in the murder trial of the former officer in Ohio who shot and killed an unarmed black man during a traffic stop in 2015.

After 30 hours of deliberations this week, the jury said they were evenly split in the murder and voluntary manslaughter trial of 27-year-old Ray Tensing, according to WCPO in Cincinnati.

The former University of Cincinnati police officer shot and killed Sam DuBose during a stop in July 2015. When Tensing asked DuBose for his license, he said he didn’t have it. Tensing told him to take his seat belt off as he opened DuBose’s car door, but DuBose started to pull away. Tensing yelled “Stop! Stop!” before shooting DuBose in the head.

The incident was captured by Tensing’s body camera. DuBose was unarmed at the time of the shooting, and did not have a gun in his car. Tensing said he feared for his life.

The second trial ended with an even split Friday. Family members of DuBose called for a third trial.

“The family commends the prosecutors for their strong presentation in this case, but we are outraged that a second jury has now failed to convict Ray Tensing for the murder of our beloved Sam DuBose,” the family said in a statement.

DuBose’s sister, Terina Allen, drew parallels to the outrage over the death of University of Virginia student Otto Warmbier, who died Monday after he was jailed in North Korea early last year for stealing a propaganda poster.

“No one is talking about ‘Otto should have gotten that punishment because he stole a poster.’ No one is ever saying that that was just. But with Sam…his infraction deserves the death penalty? The death penalty? Otto got 15 years of hard labor and they must have tortured this poor man. My heart breaks for his family,” Allen said, her voice cracking.

“But we want the same deference, black families in America want the same deference. Why is it that it’s all about what Sam did wrong when he gets a bullet in his skull. But with Otto, it’s just about how horrible Korea was. We live in the United States of America and can’t get justice. I want President Trump to be upset about what’s happening in the United States of America.”

The mistrial caps a week in which two other officers were acquitted of charges linked to fatal shootings. Last Friday, Jeronimo Yanez was acquitted of all charges in the shooting death of Philando Castile last summer in Minnesota. On Wednesday, former Milwaukee police officer Dominique Heaggan-Brown was found not guilty of first-degree reckless homicide for the fatal shooting of Sylville Smith.