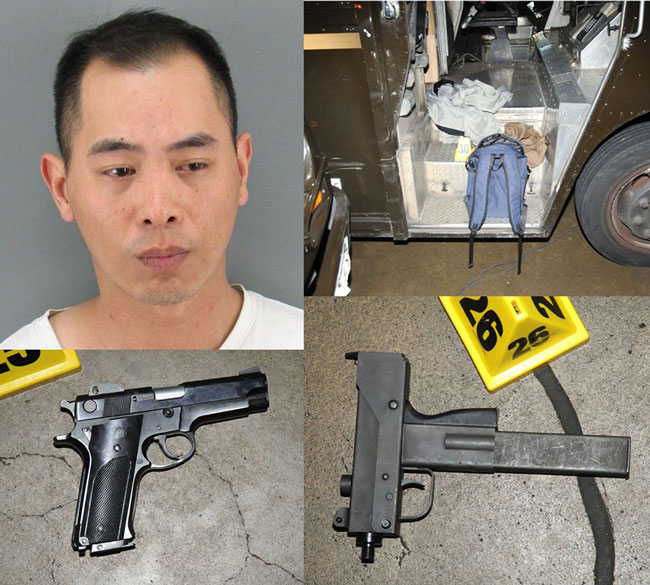 (Clockwise) The gunman was identified as Jimmy Lam and carried a backpack with a box of ammunition, as well as two guns: “an assault-type pistol” and a semi-auto pistol. (Photo: San Francisco Police Department)

The San Francisco Police Department released additional details surrounding the shooting at a UPS facility earlier this month that left four dead, including the gunman, and two injured.

According to Friday’s update, investigators think the shooter, 38-year-old Jimmy Lam, specifically sought out some of his victims, but, perhaps, not all of them.

Investigators are still trying to understand Lam’s motive, but think he specifically targeted the victims he killed — Benson Louie, 50; Wayne Chan, 56; and Michael Lefiti, 46. However, they’re unsure why he also attacked the two victims he injured.

Authorities said the shooting occurred during a routine morning briefing at the UPS facility and all but one of the victims were present at that meeting.

According to information gathered from videos and witness accounts, without warning and without saying a word, Lam pulled out a weapon and shot Louie and Chan. Then, seconds later, shot two additional UPS workers, who survived their injuries but have not been publicly identified.

Lam then left the meeting room, calmly walked outside of the building and – again without saying a word – shot Lefiti multiple times. Lam then returned to the meeting room inside.

The meeting began at 8:50 a.m. and police received the first call six minutes later. The department confirmed that all of the responding officers were equipped with body cameras.

When police arrived on the scene, they came in contact with numerous employees leaving the building. Officers led some to safety and – believing it was still an active shooter situation – instructed others to shelter in place.

Within about two minutes of entering the facility, officers located Lam, who was still in close proximity to Louie and Chan. He was still armed and held a gun to his head as officers approached. Officers pleaded with Lam to put down the gun, but he took his own life.

Officers recovered two guns at the scene, as well as a backpack belonging to Lam that contained a box of ammo. The guns were described by the police department as a semi-automatic pistol and “an assault-type pistol” with a 30-round magazine, approximately 20 rounds of which had been fired. Authorities believe only one weapon was fired.

Both firearms were previously reported stolen – one from Utah and the other out of Napa – although it’s unclear at this point how Lam came to be in possession of the weapons.

After the shooting, authorities executed a search warrant of Lam’s home, where they recovered multiple cell phones, computers, and a journal. Authorities did not say what – if any – pertinent information was found within those items.

The investigation remains ongoing as authorities work to determine what motivated Lam.