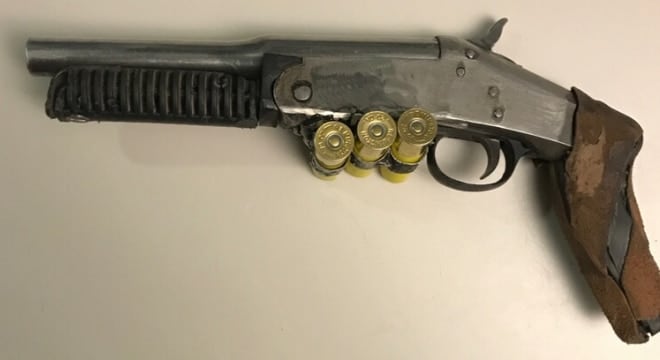 “Ernest claimed he fashioned himself as ‘Mad Max’, a reference to a violent movie involving deadly assaults from vehicles,” said the department, in the driest explanation for a five-movie franchise spanning 38 years. (Photo: Barstow SD)

A man riding a quad late last Thursday night in the desert around Barstow wound up in jail on weapons charges due to some curious items he chose to accompany him.

The Barstow Sheriff’s Department said that Jack Lee Ernest, 49, was stopped on Old Highway 58 and Leona Road at about 11 p.m. on Thursday.

After a pat-down search for weapons, officers found brass knuckles, two large knives and “an illegally sawed-off shotgun, with ammunition tactically attached to it for easy access.”

In California, laws on short-barreled shotguns are pretty strict and require a state-issued permit in addition to the traditional federal National Firearms Act requirements and the image released of the scattergun in question appear to show a single-shot hinge-break action 20-gauge. To escape regulations, the scattergun would have to be at least 26 inches long overall, with at least an 18-inch barrel.

The reason for the gauge, knucks and knives?

“Ernest claimed he fashioned himself as ‘Mad Max’, a reference to a violent movie involving deadly assaults from vehicles,” said the department.

Then again, maybe he is just a fan of “wastelanding” guns, an increasingly popular artificial aging undertaken, often by fans of the game of the same name, to create firearms and props that look as if they are fresh from a post-apocalyptic world.

Either way, until everything rides eternal shiny and chrome, you gotta keep abreast of those NFA and Cal PC laws to stay out of the slammer.

As of February 2016, according to the National Firearms Registration and Transfer Record, there were 13,423 registered short-barreled shotguns in California as well as another 3,884 guns classified as AOWs, some of which could be converted shotguns.