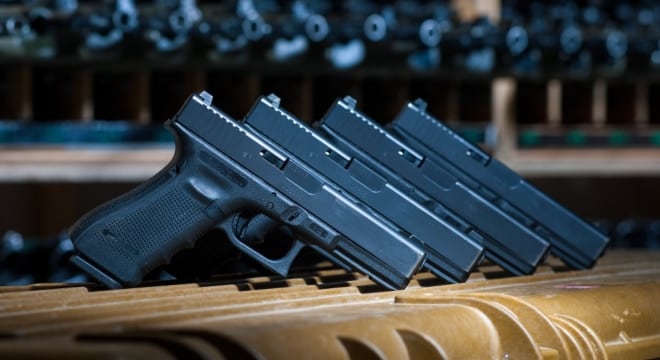 Glocks have been adopted as military sidearms by Austria, Great Britain and others, but a recent U.S. Army contract saw the pistol beat out by Sig Sauer, largely over price. (Photo: British Ministry of Defense)

The Government Accountability Office on Friday released the detailed decision on a contract protest by Glock over the Army’s selection for the Modular Handgun System contract.

The 17-page decision chronicled the Army’s efforts between August 2015 and August 2016 when the field of nine proposals from five companies was reduced to an offering by Glock and another, ultimately winning bid, by Sig Sauer.

Moving past the apples-to-apples comparison with Sig, noted by the source selection authority as having a “slight technical advantage,” the biggest difference between the two was in price. The Glock proposal quoted $272,232,563. The Sig, $169,527,169, leading it to be selected in January to fill the need for what will be the new M17 and M18 handguns for the military.

Glock protested the selection on Feb. 24, arguing the Army Material Command did not properly evaluate their proposal, citing officials improperly calculated Sig Sauer’s total price by undercounting the number of spare parts required and other factors.

Taking a second look at it after the protest, the Army crunched the figures again and admitted they miscalculated Sig’s pricing, noting the correct number of spares would add another $1.6 million to their price, still falling short of bridging the gap noted by the selection authority.

Glock also outlined a series of protests related to ammunition, the gun’s manual safety weight, and others, which the GAO found that, even if granted, “does not appear likely to provide Glock with a substantial chance of receiving the award.”

The 17-round capacity M17 is set to replace the various versions of the M9 Beretta placed into service with the Army since 1985 while the M18 will supplement the M11 Sig. The Fort Campbell, Kentucky-based 101st Airborne will be the first to use the new handguns, possibly as early as this year.