ICE: Mexican national arrested in Arizona was trying to smuggle out 7,000 rounds of .38 Super 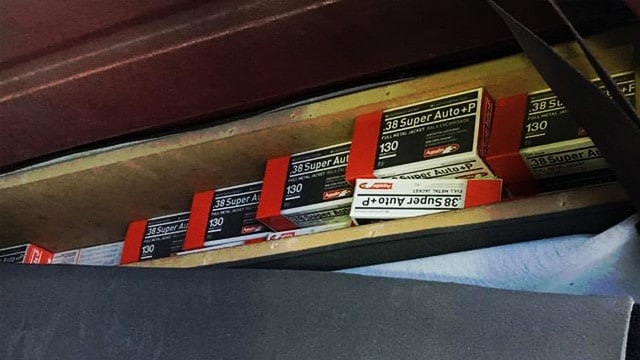 Eduvier Navidad-Vizcarra was booked into the custody of the U.S. Marshals Service based on charges accusing him of attempting to illegally export goods from the United States. (Photo: ICE)

Federal immigration authorities arrested a Mexican national last week for allegedly attempting to smuggle more than 7,000 rounds of ammo down to Mexico.

Eduvier Navidad-Vizcarra, 22, was arrested June 19 as he drove towards the port of entry into Mexico in Nogales, Arizona. Federal agents began investigating him a couple days earlier after they received a tip, according to a news release from U.S. Immigration and Customs Enforcement.

“On June 17, 2017, at approximately 2:00 p.m., Homeland Security Investigations…agents received information that 7,000 rounds of Aguila .38 Super ammunition had been purchased in Phoenix by an individual who was driving a dark green Chevrolet Suburban,” wrote ATF Special Agent Robert Kilcoyne in a criminal complaint.

Within a couple hours, HSI agents, together with the ATF, located the vehicle and followed it back to Tucson. That’s where agents watched Navidad-Vizcarra take the boxes of ammo out of the Suburban and load them into a white Chevy pick-up truck.

“Navidad-Vizcarra took the cases from the Suburban, placed them in the cab of the truck, removed the small, individual boxes of ammunition from within the larger cases, and hid the small boxes somewhere behind the bench seat of the truck,” says the complaint.

When he started driving towards Nogales, agents tailed him, and eventually pulled him over. They searched the compartment and found the 7,000 rounds.

During an interview with agents, Navidad-Vizcarra at first said someone else had loaded the ammo, But when agents told him they’d watched him to do it, he confessed. He also said he’d smuggled ammo into Mexico the exact same way – hidden in a speaker box behind the bench seat – three times before. He said he’d been working for “unknown persons” in Mexico.

“One of HSI’s top enforcement priorities is preventing ammunition from falling into the hands of those who might seek to harm innocent people,” said Scott Brown, special agent in charge of HSI Phoenix.

If convicted, Navidad-Vizcarra faces up to 10 years in federal prison.