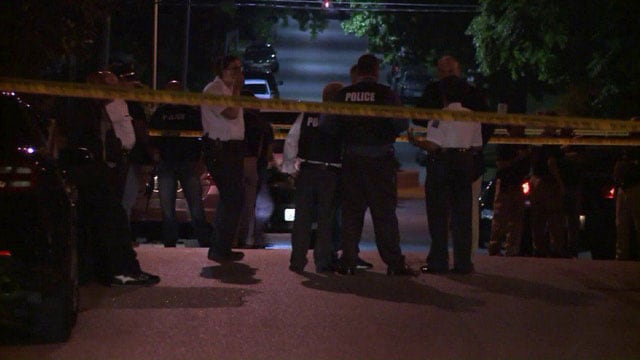 Authorities investigate after an exchange of gunfire that occurred during the pursuit of a stolen vehicle. (Photo: Fox 2)

A white St. Louis police officer — saying he feared for his safety — shot and wounded an off-duty black colleague who was assisting during a pursuit last week. The incident refreshes the question of how race plays a role in when law enforcement decides to use deadly force.

“This happens to be the first time in the national discourse that we’re aware of a black professional, or a law enforcement officer himself, being shot or treated as an ordinary black guy on the street and we can see that this is a real problem,” said Rufus Tate, an attorney for the black officer’s union, to local media.

Tate said there’s no description in the police report that the 38-year-old off-duty officer with 11 years on the force acted in a threatening manner, but rather “there is this perception that a black man is automatically feared.”

According to June 22 statement by the St. Louis Police Department, the shooting occurred on June 21 after a high-speed police chase ended when three suspects crashed a stolen vehicle after hitting spike strips in the off-duty officer’s neighborhood in downtown St. Louis.

Leaving their vehicle, the suspects opened fire on responding officers, who backed off a bit before pursuing them on foot. Fearing for their safety, they returned fire, striking a 17-year-old suspect in the ankle. They arrested another suspect, also 17, but the third got away.

Moments later, another officer arrived on the scene, observed the off-duty officer walking toward the responding officers and, fearing for his and their safety, fired at him, striking him in the arm. St. Louis police called it “friendly fire.”

That officer was described as a white male, 36 years old and an eight-year police veteran.

Per department policy, the officers involved in the incident — seven total — have been placed on administrative leave. The department’s Force Investigative Unit is reviewing the matter.