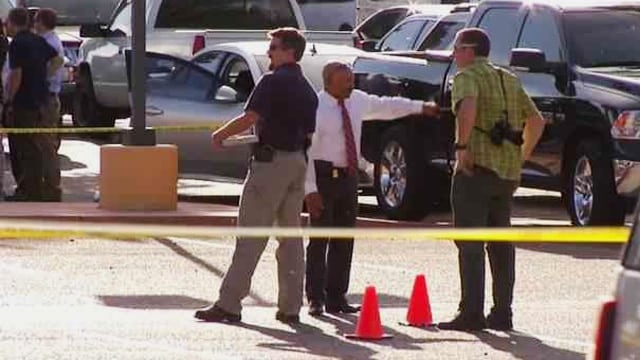 A Mexican national who’s been deported three times was arrested and charged in Albuquerque last week with federal firearms violations after a drug bust in a Home Depot parking lot went south.

Quezada-Lara met with an undercover agent on June 19 to buy some methamphetamine. According to a criminal complaint, agents tried to arrest him after the purchase, but he threw his car into reverse, slamming into a parked car. Then he drove forward, striking and injuring an FBI task force officer with the vehicle before speeding away.

Witnesses told KOB-TV in Albuquerque that federal agents opened fire on Quezada-Lara’s vehicle as he fled the scene. “He’s just probably emptying his whole clip,” said Josh Chavez, who was in a car with his wife and three kids, just feet from the fleeing vehicle as the agent opened fire.

“Either we woulda got hit by the car, or been in the line of fire,” he said, explaining how his wife stopped the car just in the nick of time. “Cuz I mean it was just, we were just off by seconds.”

Chavez said before he knew it, there were about ten agents on the scene. “And they all had their faces covered,” he said. “All you could see was their eyes.”

By then, Quezada-Lara was gone, having fled the scene, running red lights and speeding upwards of 100 miles an hour.

The next day, federal agents tracked down Artega, who told them Quezada-Lara was using methamphetamine. When agents went to his home, his grandfather let them search his bedroom. They found a Smith & Wesson .38-caliber revolver and a Winchester Model 94 rifle. Both firearms were loaded and there was more ammo in a bedside drawer.

In a phone call with Acee that same day, Quezada-Lara said he wanted to turn himself in and expressed remorse for hitting the agent in the parking lot.

“Is the officer ok?” he asked Acee during the phone call. “I am sorry, I just got scared and didn’t know what to do. I panicked.”

Quezada-Lara agreed to stay where he was, and authorities went and arrested him without incident. In an interview with Acee, he said he was addicted to methamphetamine and had smoked some the morning of the drug bust in the parking lot. He said he had the guns in his bedroom to protect himself.

“(Quezada-Lara) said he had purchased the firearms on the street in Albuquerque,” wrote Acee in the complaint. “(He) acknowledged that he should not possess firearms because he was not an American citizen.”

Quezada-Lara was appointed a public defender and has been ordered held pending a trial. He faces a maximum of ten years for each charge. If convicted, he’ll be subject to removal from the United States upon completion of his prison term.

As for Chavez, he said he didn’t understand why the federal agent had to open fire in the parking lot when there were so many people around.

“How far does a bullet travel once it leaves that barrel?” Chavez asked. “There was no need to start shooting rounds off in a busy parking lot. Cuz that parking lot was packed.”