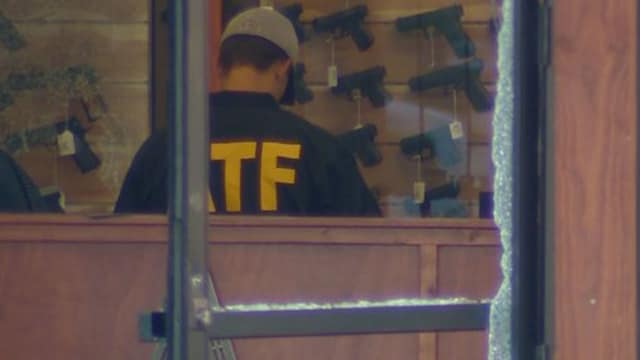 Federal authorities said this week four gun store burglaries in Colorado could be connected, according to a report from Channel 9 News.

The local NBC affiliate said the Bureau of Alcohol, Tobacco, Firearms and Explosives continues investigating a string of thefts dating back to April 18 when masked intruders drove a vehicle into a Colorado Springs store and grabbed nearly two dozen guns from the smashed cases.

Store owners in Littleton and Lakewood reported two more “smash and grab” style thefts in May. A fourth incident unfolded early Tuesday morning when the masked suspects crashed a stolen Jeep Cherokee into the front entrance of DCF Guns in Castle Rock, grabbing an untold number of guns.

“All had masks or clothing cover their faces,” Castle Rock Police Department Sgt. Tim Ratcliff told 9 News. “One had a Shrek mask on.”

Investigators believe the thieves have stolen 45 guns, so far. The ATF is offering a $10,000 reward for information about this string of thefts.

“Those firearms aren’t going to be sold to a law abiding citizen,” Ratcliff said. “They are going to a criminal.”

Gun thefts in Colorado doubled last year, according to the ATF, marking a 10-year high for the state. The agency said criminals stole 273 firearms from federally-licensed dealers in 2016, up from just 56 in 2014.

Gun thefts remain on the rise nationwide, the ATF said, peaking at 7,858 stolen firearms in 2016.

“We are very concerned about the rise in gun thefts. These guns will not be used for hunting or sport; they are destined for future crimes and are a threat to public and officer safety,” ATF Denver Field Division Special Agent in Charge Debora Livingston said in a March press release. “ATF is working closely with all the affected police departments in the Denver Metro Area to identify and arrest suspects, recover guns and prevent future thefts. We are also frequently communicating with gun dealers in the Metro Area to inform them of the rise in break-ins and help them better protect their store and inventory.”