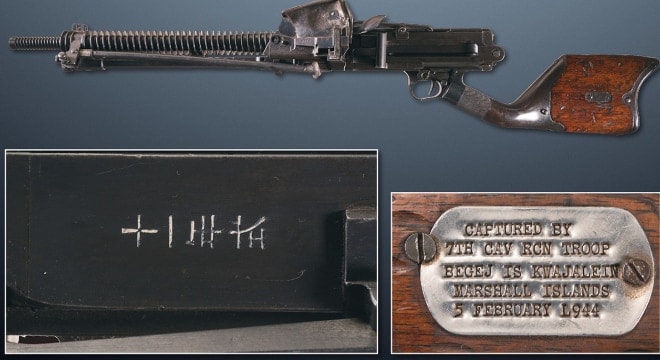 A Japanese Type 11 light machine gun – Kijirō Nambu’s take on the French 8mm Hotchkiss chambered in 6.5x50mm Arisaka — captured on Kwajalein Atoll in 1944 by American troops. Such guns, if not registered before 1968 and not demilled, are illegal in the U.S. (Photo: Rock Island Auction)

Legislation introduced in both chambers of Congress on Monday would open an 180-day amnesty for veterans or their family to register guns captured overseas.

The bipartisan Veterans Heritage Firearms Act aims to allow former service members or their family to declare guns brought back to the states before Oct. 31, 1968, without fear of prosecution. Sponsors argue the bill will save historical artifacts that have become treasured, but legally risky, family heirlooms.

“Our World War II and Korean War Veterans risked their lives in foreign lands in defense of our freedoms,” said U.S. Sen. Tom Cotton, R-Ark, co-sponsor with Maine Independent Angus King, of S.1435. “These firearms represent the sacrifices they made in the name of duty and are often treasured keepsakes.”

The bill would briefly open the National Firearm Registration and Transfer Record to veterans and their family to register certain firearms. The NFRTR is the federal government’s database of National Firearms Act items including machine guns, suppressors, short-barreled rifles and shotguns, and destructive devices.

Many veterans legally brought back captured enemy weapons from overseas in the wake of America’s wars. Provided they had the right paperwork, some could properly register NFA defined items as Title II firearms before 1968. Others, who either didn’t have the paperwork or chose not to register, illegally owned their trophies after that date and often these guns are still in circulation — putting the possessor at risk of up to 10 years in federal prison.

Marine John Sullivan, during the Pacific island-hopping campaign of World War II, recovered a Japanese Type 99 light machine gun from a pillbox on Iwo Jima. Although unregistered in the NFRTR, Sullivan placed the weapon on display for over three decades over his bar until one day in 1981 when the law came looking for it. The gun was only saved from the scrap heap by extraordinary efforts from local and federal law enforcement that eventually saw it put on display at a local museum.

These weapons, often hot potatoes for descendants on a veteran’s passing, are sometimes destroyed. In 2009, police outside of Birmingham, Alabama were called when a county road crew found five Japanese and Italian machine guns, an anti-tank rifle and a Japanese 50mm mortar thrown into a shallow creek. Still in working condition, the WWII-era guns were neither reported stolen nor listed on the NFTFR, prompting officials to ask the public for any information on the mystery weapons.

Other such trophies, such as a German StG44 in 2012, show up at police “buybacks,” brought by family members of vets.

A House version of the legislation, H.R. 3054, is backed by U.S. Reps. David Poe, R-Tenn., and Lou Correa, D-Calif., who argue the measure allows veterans to legally pass on their family history.

“Giving these heroes the opportunity to register their antique firearms will allow families to preserve these historical artifacts as an important part of their family heritage,” said Poe.

The bills are awaiting committee assignment.