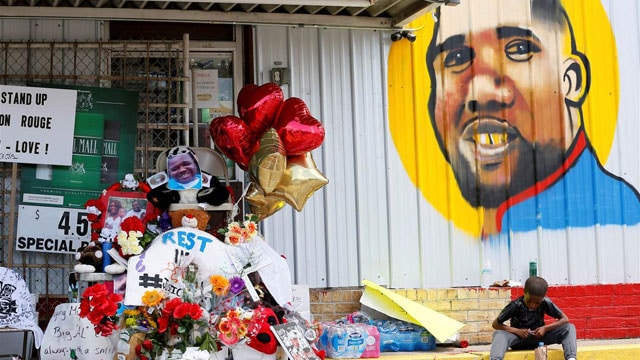 Attorneys representing the five children of Alton Sterling, a 37-year-old black man who was shot outside of a Baton Rouge convenience store by a white police officer last year, filed a wrongful death lawsuit against the city Tuesday.

“The City of Baton Rouge has a long standing pervasive policy of tolerating racist behavior by some of its officers,” the lawsuit says, adding there have been multiple reports of officers making racist comments and the tolerance of such comments has led to the mistreatment of the black community. As a result, the lawsuit says Sterling’s death was the result of poor training and inadequate procedures.

Michael Adams, who represents Sterling’s children, said he realizes there’s nothing that can be done to bring Sterling back. “This is about his children and this is about bringing this community together,” he said.

Attorney L. Chris Stewart, who is also part of the family’s legal team, expects law enforcement officers – both current and former – to back the accusations laid out in the case. “We have talked to officers who have said something is wrong and it must stop,” he said, according to NBC News.

Before Sterling died, police had received two calls about him. The first caller said Sterling had been in the store’s parking lot selling CDs and the second claimed Sterling pulled a gun on someone. In their visit, the officers responded to both calls.

Acting under the directive that their main priority was to secure the scene and Sterling’s weapon, the officers instructed Sterling to place his hands on the hood of the patrol car, but he refused and a struggle ensued. Officers deployed a Taser twice, but had no effect on Sterling, who stood 6-foot-3 and weighed around 300 pounds.

Salamoni wrestled Sterling to the ground, but then Sterling had a hand near his pocket and the officers continued to struggle subduing him. It was also during this time that the officers noticed a gun in Sterling’s pocket, which was later determined to be a loaded .38 revolver.

The lawsuit says Sterling suffered from breathing problems, was unable to lie on his back for an extended period, and was in agony as he died. The suit also says the officers’ actions were unreasonable, vicious, and negligent.

After a nearly one-year investigation, the Justice Department announced last month that neither Salmoni or Lake would face any federal charges related to the shooting. However, Louisiana’s attorney general is still working to determine whether state criminal charges are appropriate.

Sterling’s family filed the lawsuit days after wrongful death cases of other high-profile police shootings of black men settled. While families received a cash settlement, in both cases the officers were cleared of any wrongdoing.

The family of Philando Castile, who was killed in a Minneapolis suburb the day before Sterling, was awarded $3 million out of court this week. On July 6, 2016, an officer shot Castile after Castile informed him he had a concealed weapon. The officer opened fire as Castile reached for his wallet.

The parents of Michael Brown settled this month with the city of Ferguson, Missouri, in a federal court over the death of their son for an undisclosed sum. Brown was killed in August 2014 during a physical confrontation with a white police officer. Responses to the incident brought national scrutiny to the St. Louis suburb, which would later reveal issues that would frame the debate regarding policing tactics in minority communities.