According to court documents, the June 14 Times opinion piece, titled “America’s Lethal Politics,” posited it was a map circulated by her political action committee that prompted the shooter, Jared Loughner, to injure 13 people total, including a U.S. District Court chief judge and a 9-year-old girl. Giffords’ injuries left her with a disability affecting her speech, but the incident prompted her and her husband, former astronaut Mark Kelly to launch a national gun control organization. 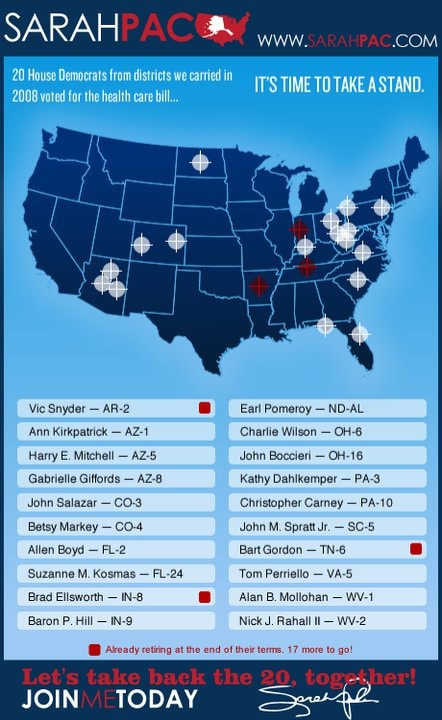 Further, the complaint says the Times used this “false assertion” about Palin as an “artifice” to write about the June 14 shooting of lawmakers at a congressional baseball practice, where GOP Rep. Steve Scalise was injured and only recently released from intensive care.

The Times used this “to support its assertion that there was a ‘sickeningly familiar pattern’ of politically motivated violence against members of Congress,” the complaint says.

The Times knew the editorial’s speculative conclusion was wrong when the “fabricated story” was published, according to Palin, and it was only after it received negative feedback on the matter did it move to issue “half-hearted” corrections and apologies.

“None of which sufficiently corrected the falsehoods that the paper published,” the complaint says. “In fact, none mentioned Mrs. Palin or acknowledged that Mrs. Palin did not incite a deranged man to commit murder.”

Palin argues the shooter had a longtime “obsession” with Giffords that predated the image her PAC released and argues it simply “depicted congressional districts that Republicans were targeting for victory in an upcoming election.”

The image put out by Sarah PAC shows a map of the United States with crosshairs on 20 districts controlled by Democrats who voted for a 2008 health care bill, their names listed below that. Giffords’ name was on that list. The words “It’s time to take a stand” sit atop the image.

Because of the “mere suggestion” Palin incited the 2011 shooting — which initially arose shortly after the near-deadly event — her professional and private life was adversely impacted, to include “the end of her position as a Fox News political commentator” and the influencing of “her decision not to run for President of the United States.”

“When The Times resurrected a 6-1/2 year-old false rumor about Mrs. Palin, it not only ripped open old wounds, but also used its loud and far-reaching voice as the ‘newspaper of record’ to inflict new ones which are far worse and painful for Mrs. Palin.”

Palin is seeking a jury trial and relief for damages to be established at trial “far in excess of $75,000.”

“It took Mrs. Palin years to overcome the detrimental impacts of the false speculation that she caused Loughner to commit murder,” the complaint says. “Unfortunately, members of the media perceive Mrs. Palin as a convenient target for attacks against conservative policies and a subject likely to spark readership interest.”