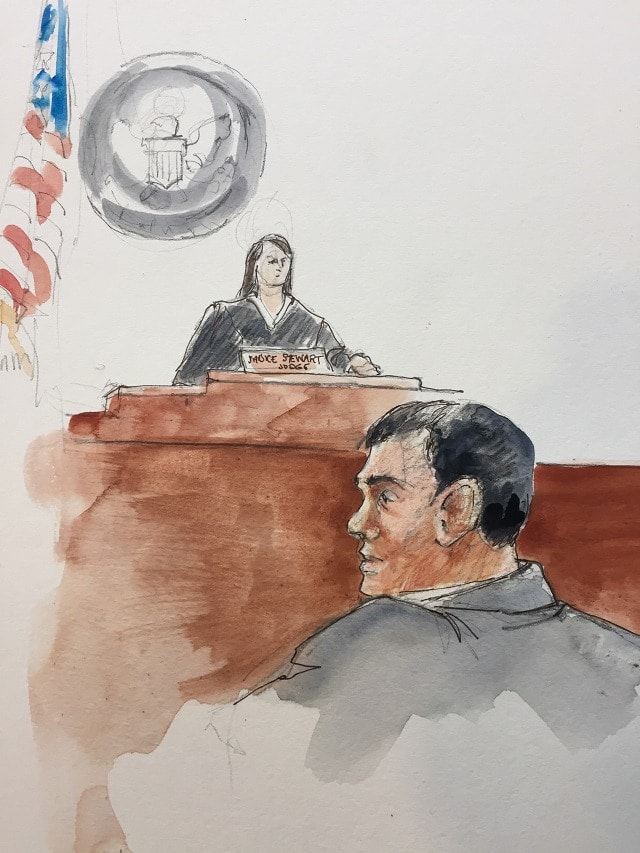 Courtroom art of W. Joseph Astarita appearing before a judge in a Portland federal court on June 28, 2017. (Photo: KOIN)

An FBI agent pleaded not guilty in a Portland federal court Wednesday to charges he lied to his superiors and investigators about firing two shots at Robert “LaVoy” Finicum just before he was killed last January.

W. Joseph Astarita, 40, is charged with three counts of making a false statement and two counts of obstruction of justice, according to an indictment unsealed Wednesday.

Astarita appeared in a packed courtroom and said nothing as a lawyer entered his not guilty pleas for all five counts, according to the Associated Press.

On Jan. 26, 2016, Finicum, a spokesman for the group who took over the Malheur National Wildlife Refuge, swerved his truck into a snowbank — nearly hitting an FBI Hostage Rescue Team member — to avoid a roadblock on U.S. 395 in Oregon. After the car stopped, Finicum got out. Video released last year shows a window shatter as Finicum raised his hands in the air.

“Go ahead and shoot me,” Finicum can be heard saying. The 54-year-old Arizona rancher was facing an Oregon State Police trooper and reached for a loaded 9mm handgun in his pocket when he was shot three times, with one bullet hitting him in the heart. Those shots were fired by state troopers. In the weeks after his death, the Justice Department’s Office of Inspector General began investigating unreported shots that were fired before Finicum was hit by OSP trooper fire.

That investigation led to the charges against Astarita, a member of the FBI’s Hostage Rescue Team. The indictment alleges he lied to three of his supervisors about firing his weapon during the incident. He also “did knowingly engage in misleading conduct toward…officers of the Oregon State Police, by failing to disclose that he had fired two rounds,” the indictment says.

“The actions of the FBI (Hostage Rescue Team) in this case damage the integrity of the entire law enforcement profession, which makes me both disappointed and angry,” said Deshutes County Sheriff Shane Nelson at a press conference on Wednesday.

An obstruction of justice conviction for Astarita could carry up to 20 years in prison, and a conviction for making false statements can mean a sentence of up to five years. A jury trial has been set for Aug. 29.

Oregon U.S. Attorney Bill Williams clarified Wednesday that the charges against Astarita did not “call into question the findings of the Major Incident Team’s investigation of OSP’s use of deadly force.”