Aussies looking for those responsible for killing, desecrating Kangaroo 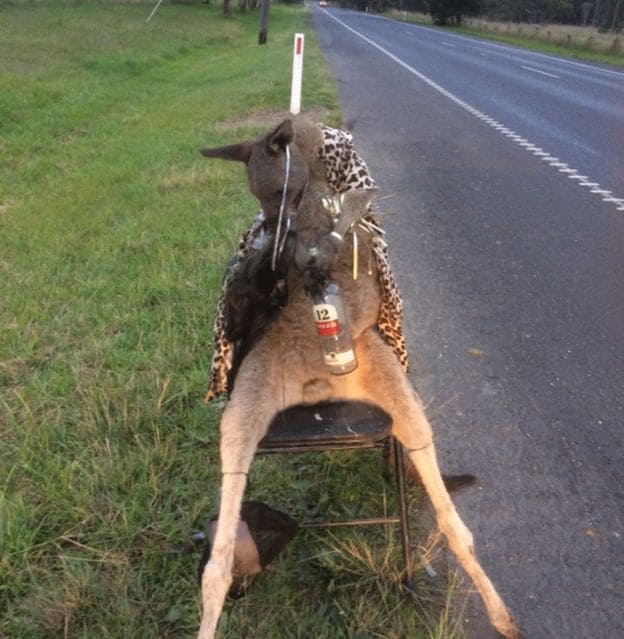 A kangaroo sits lifeless on a chair, dressed in a leopard-print shirt and posed in a sitting position with a bottle of liquor. A hat rests at its feet. (Photo: Victorian State Government)

Australian authorities are investigating an incident where a kangaroo was shot and posed on a chair on the side of a road near Melbourne.

The animal was shot at least three times before being dressed in a leopard-print shirt and put in a sitting position with a bottle of Ouzo liquor in its paws.

Though it’s legal to hunt roo in some parts of Australia — and apparently Skippy is a delicious and environmentally-friendly alternative to beef and pork, according to one BBC article — the person who dispatched this kangaroo decided to have a little naughty fun with its carcass in an area of Victoria where the animal was protected.

“This is appalling and immoral behaviour and we are urging anyone with information to come forward,” said Mike Sverns, spokesman for Victoria’s Department of Environment, Land, Water and Planning.

The department has partnered with police to help solve the crime, which was reported last month but authorities released a photo of the kangaroo this week in the hopes someone will come forward.

“It would have taken some time to stage the kangaroo in that position on the side of the road and we are certain that someone would have seen something, given the public area and traffic flow of this main road,” Sverns said.

Killing protected wildlife carries a penalty of up to $36,500 and up to two years in jail. There are reportedly some 34.3 million kangaroos in Australia, according to the most recent census count.