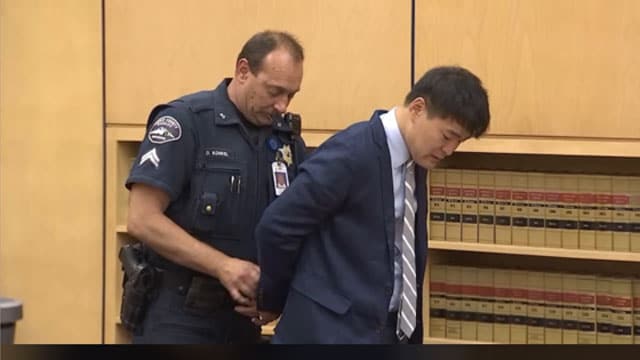 Min Kim is placed in handcuffs before he is escorted out of court. (Photo: Komo News)

A Washington store owner who fatally shot an unarmed and fleeing shoplifter last March was sentenced in court Friday to spend eight years in prison.

Min Kim, 31, pleaded guilty to second-degree murder earlier this year. He initially faced up to life in prison, but prosecutors asked for 10 years, while Kim’s attorney asked for two years, according to reports from local media.

Kim said he fired in self-defense when the suspect, Jakeel Rashon Mason, 21, reached for his gun during the incident inside the Spanaway store on March 25, 2016. A struggle ensued after Kim caught Mason trying to steal from the store. But during his sentencing, Kim acknowledged that his actions were wrong.

“I’m here to take responsibility for my actions in taking Mason’s life,” Kim said in court. “I accept the consequences. I did not have the right to take his life.”

Kim added that he feels “terrible” about taking Mason’s life and that is something he will have to live with for the rest of his life.

Before Kim was handcuffed and escorted out of the courtroom, he asked the judge permission to write a letter of apology to Mason’s family. While contact between the defendant and the victim’s family isn’t typically permitted, the judge approved Kim’s request.

Just one month before Mason was killed, Kim’s wife was working at the store when it was targeted by a group of armed robbers. She exchanged gunfire with the suspects and was shot in the stomach. Kim’s wife survived, but he said the incident left him feeling especially raw and fearful of another such incident occurring.

“This is a tough one because we can understand why the store clerk was on guard. His wife has just been shot there a month before during a robbery attempt and the whole family was upset about it,” Detective Ed Troyer, with the Pierce County Sheriff’s Office said after the shooting. “But that doesn’t give you the license and the right to arm yourself and shoot people who may be involved in shoplifting.”

On the day of Mason’s death, Kim caught him attempting to steal items from the store. However, once Kim, who was armed, confronted Mason, he dropped the items and put his hands up. Kim said at that point, believing Mason was not a threat, he put his pistol away.

Kim grabbed Mason’s jacket and instructed him to stay put while he called the police, but when Mason tried to leave, a scuffle ensued. Troyer said surveillance video showed Kim repeatedly punching Mason in the face as he tried to leave the store. Then, Kim retrieved his pistol and fired multiple rounds into Mason’s back as he attempted to flee.

Kim originally said Mason was on top of him during the scuffle and reaching for his gun when he fired, but Troyer said that story is not consistent with what’s seen on the surveillance video, which captured the entire encounter. Kim, knowing the video showed him taking another man’s life, has refused to watch it.

Mason collapsed in the doorway and died before first responders arrived on the scene.

Kim’s family cried as his sentence was handed down, while there was no one present on behalf of Mason.