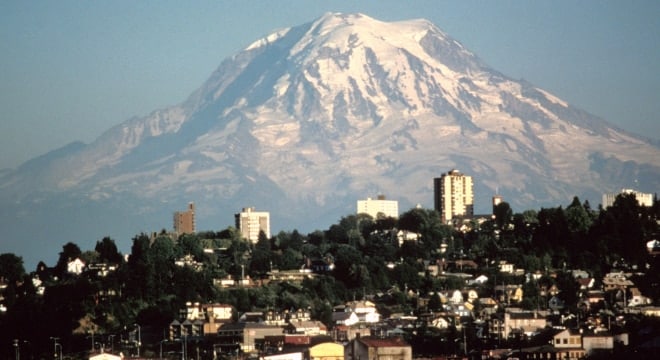 Mount Rainier over Tacoma, one of the last cities to drop their bans on Tasers and stun guns. (Photo: Wikimedia Commons)

In a unanimous vote by Tacoma’s city council and mayor this week, Washington’s third largest city approved language for a new ordinance lifting a decade-old ban on electronic weapons.

The adopted measure, Ordinance 28433, repeals the ban on “any electric or other conductive energy device” but keeps blackjacks, sandclubs, slungshot, metal knuckles, switchblades, martial arts weapons and bail flails on the list of unlawful weapons.

“We are one of only a handful of cities left in the United States that actually has this in their code,” Bill Fosbre, Tacoma’s City Attorney, told the City Council prior to the vote on the measure. “We reviewed the case law, we looked at our own state constitution, and made the determination that, as written in our code, it would not sustain a challenge.”

The city adopted the ban on electronic weapons in 2006. The law established that, with exceptions for devices used by law enforcement, possession of an electronic weapon in the city could result in a $5,000 fine, or one year in jail, or both.

The vote follows the Firearms Policy Coalition pressing the city to remove ordinances against the sale, manufacturing, purchasing, possessing or carrying of any “electroshock device” by a law-abiding resident, visitor or traveler.

FPC attorney Stephen Stamboulieh in April made Tacoma city government aware of the flaws in their Taser ban, citing the 2008 Heller decision as well as a 2016 Supreme Court case directly concerning stun guns.

“As the Supreme Court noted in Caetano v. Massachusetts it has held that ‘the Second Amendment extends, prima facie, to all instruments that constitute bearable arms, even those that were not in existence at the time of the founding,’” said Stamboulieh in a statement emailed to Guns.com.

Since the Caetano case, a flood of lawsuits has seen bans on the devices scrapped in Baltimore, New Orleans, Washington D.C. and other cities. Litigation is pending in New York, New Jersey, and Massachusetts.