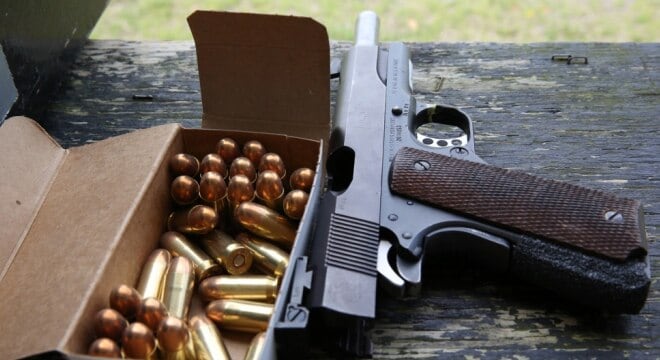 The measure is designed to speed up the now two-year saga of transferring surplus M1911 .45ACP handguns from Anniston Army Depot to the Civilian Marksmanship Program. (Photo: Department of Defense)

An Alabama Congressman has managed to pass an amendment to the National Defense Authorization Act out of committee aimed at moving surplus Army pistols to the public.

In a statement from his office, U.S. Rep. Mike Rogers, a Republican that represents the Anniston area in Congress, announced his amendment to the NDAA has moved out of the House Armed Services Committee and is headed to the floor. The measure is designed to speed up the now two-year saga of transferring a stockpile of surplus M1911 .45ACP handguns from Anniston Army Depot to the Civilian Marksmanship Program.

“Similar language has been in the last two NDAAs, but the previous Obama Administration would not allow the Army to deliver the pistols to the CMP for political reasons,” Rogers said in the statement.

In 2015, President Obama signed the FY16 spending bill into law, which authorized the Army to transfer no more than 10,000 of their estimated 100,000 surplus 1911s per year to the CMP during a one-year pilot program.

As part of the starter program, the Pentagon would have to report back to Congress both the exact number of guns sold as well as any information on any crimes committed using firearms transferred. Also, the CMP would have to obtain a federal firearm license to conduct any and all handgun sales and adhere to all local, state, and federal laws in respect to those sales.

Fast forward to today and, while Depot officials earlier this year showed Guns.com crated 1911s ready to transfer, and CMP is eager to receive them to begin the lengthy process to inspect, grade, and sell these pistols to the public, the guns are still in a holding pattern.

“I am thrilled my amendment on 1911 pistols passed the committee,” Rogers said. “The fight for this is still not over, but I will continue to push this issue as the legislation moves to the House floor. The real battle will be in Conference with the Senate.”

As for CMP, Chief Operating Officer Mark Johnson advised the group has, “no further information at this time.”